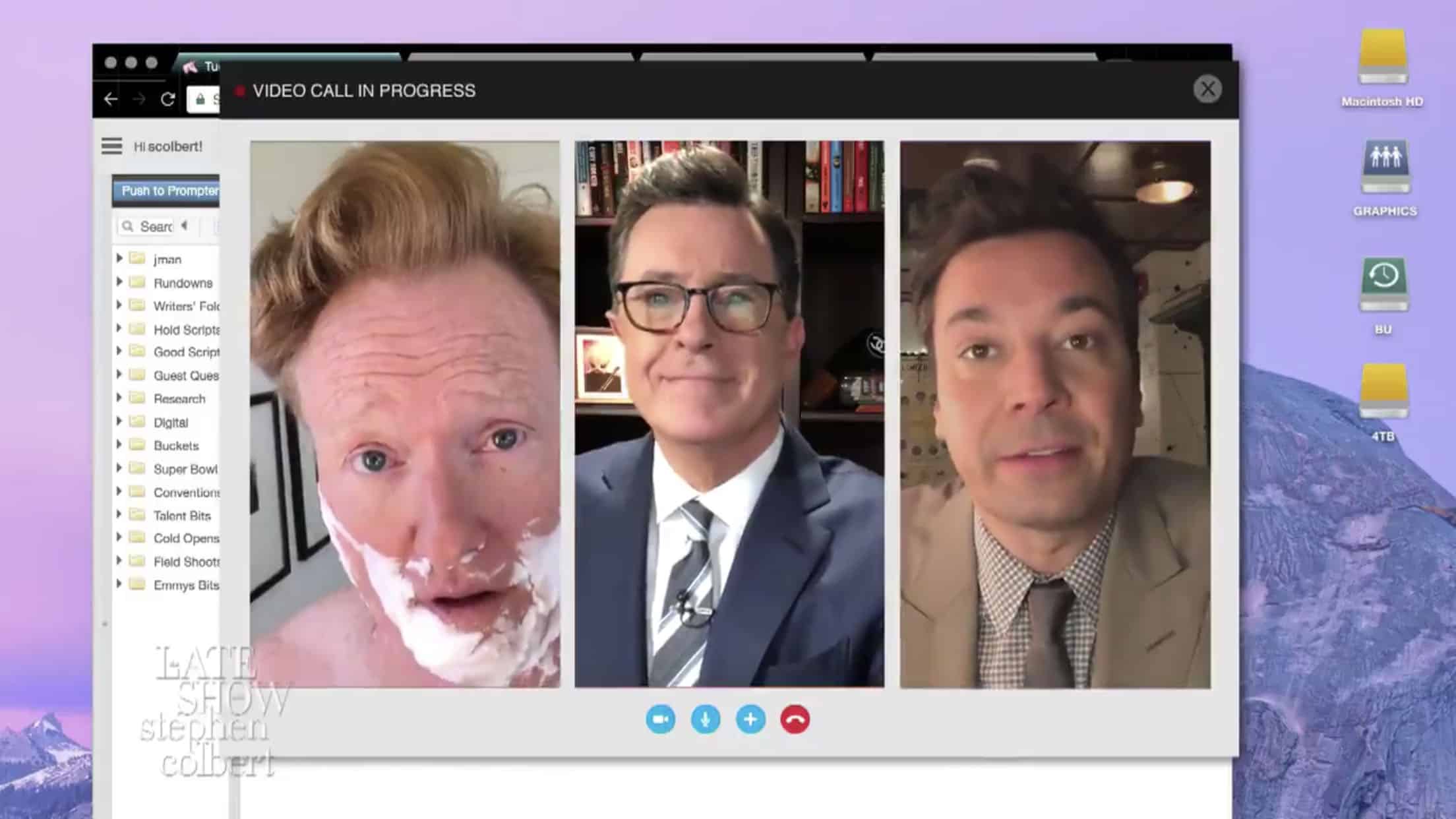 This is the first time three late-night hosts have appeared on each others' shows since the writers strike in 2008.
CBS
Share
By Jason Lynch
|
June 27, 2018
Share

Every weeknight, Stephen Colbert and Jimmy Fallon battle each other for the bigger piece of the late-night audience. But on Tuesday, the 11:30 rivals united to take on a common opponent who has been attacking them both: President Donald Trump.

Colbert, Fallon and fellow late-night host Conan O’Brien appeared via videochat on a “cold open” segment that aired on both The Late Show With Stephen Colbert and The Tonight Show Starring Jimmy Fallon on Tuesday night. (O’Brien’s TBS show Conan was in repeats this week.)

In the segment, Colbert is at his computer writing that night’s monologue, when Fallon video chats him. “Hey, lowlife!” says Fallon, prompting Colbert to respond, “Hey, lost soul!” as the men referenced Trump’s derisive comments about each of them during Monday’s rally in North Carolina.

“I’m busy having no talent,” says Colbert, who suggests conferencing in O’Brien to talk about Trump’s rally. But O’Brien, who is shaving, claims to have no idea about the current political landscape: “The real estate guy who sells steaks? He’s president?”

On Late Show, after the cold open aired, Colbert was introduced as “the guy on CBS,” another Trump rally reference.

The controversy stems from a recent Hollywood Reporter podcast in which Fallon admits that he regrets his infamous interview with then-presidential candidate Trump, when he asked him softball questions and playfully ruffled Trump’s hair. That episode is widely seen as the moment when the late-night momentum began to shift to Colbert and his political-fueled brand of comedy.

Even though this wasn’t the first time Fallon apologized for treating Trump with kid gloves—he made similar comments last year to The New York Times—the podcast interview was picked up by conservative outlets, prompting Trump to criticize Fallon Sunday, tweeting “Be a man Jimmy!”

.@jimmyfallon is now whimpering to all that he did the famous “hair show” with me (where he seriously messed up my hair), & that he would have now done it differently because it is said to have “humanized” me-he is taking heat. He called & said “monster ratings.” Be a man Jimmy!

Fallon responded later Sunday night, tweeting that he was going to donate to RAICES (the Refugee and Immigrant Center for Education and Legal Services) in “honor of the President’s tweet.”

Trump kept up his late-night assault the next night, during Monday’s rally in South Carolina. He attacked Colbert (“The guy on CBS, what a lowlife.”), Jimmy Kimmel Live’s Jimmy Kimmel (“no talent … that guy’s terrible.”) and Fallon (“He looks like a lost soul.”).

This is the first time that multiple late-night hosts have appeared on each other’s shows since 2008, when O’Brien (then hosting Late Night With Conan O’Brien), Colbert (The Colbert Report) and Jon Stewart (The Daily Show With Jon Stewart) staged a faux late-night battle across their three shows to kill time during the writers’ strike.

Colbert and Fallon have been fighting for late-night supremacy since Colbert’s Late Show premiered in 2015. Currently, the Late Show averages more than a million more viewers than the Tonight Show, and while Fallon has maintained the edge in the adults 18-49 demo, his lead has shrunk to less than a tenth of a ratings point.

While previous Tonight Show and Late Show hosts Jay Leno and David Letterman were famously frosty (though they make a surprise joint appearance, alongside Oprah Winfrey, in a 2010 Late Show promo that aired during the Super Bowl), Colbert and Fallon have been more cordial competitors. Colbert popped up on Fallon’s first Tonight Show in 2014, while Fallon returned the favor a year later for Colbert’s Late Show debut.

The three men all compete at 11:30 for now, but that will change next year when O’Brien scales back his late-night TBS series, Conan—which airs at 11 p.m.—to a nighty half-hour format.