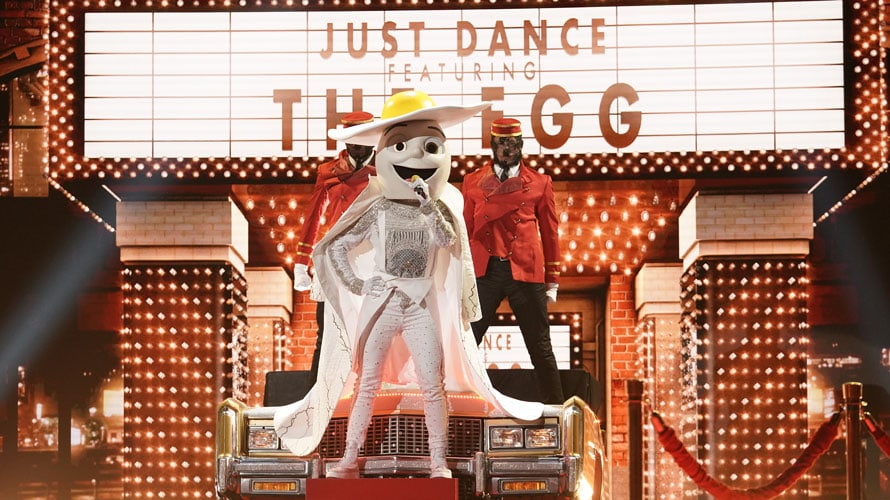 The Masked Singer's Season 2 costumes include Egg (above), Butterfly, Flamingo and Black Widow. - Credit by Fox

While Fox is debuting two new shows this week—animated comedy Bless the Harts and drama Prodigal Son—the network’s top entertainment priority this fall is continuing the momentum of last year’s breakout The Masked Singer. The reality competition show returns tonight for Season 2, and will be back midseason for Season 3, which kicks off after the Super Bowl on Feb. 7, 2020.

The Masked Singer—Fox’s bonkers new reality show in which celebrities disguised head-to-toe in outlandish costumes sing while judges Jenny McCarthy, Robin Thicke, Ken Jeong and Nicole Scherzinger try to determine their identities—became broadcast’s biggest freshman hit soon after debuting in January. It was last season’s No. 5 show in the 18-49 demo, with a 3.8 Nielsen rating.

Fox Entertainment CEO Charlie Collier said moving The Masked Singer to fall was his biggest swing going into the new season, and execs are hoping to avoid the sophomore slump that hobbles many freshman breakouts.

“It felt like waiting for an entire year to bring it back would be foolhardy. Summer was too quick; fall felt right,” said Rob Wade, president of alternative programs and specials at Fox Entertainment. “And then we looked at it, and then we had this thing called the Super Bowl, and it was like, ‘What do you do with that?’”

Fox isn’t worried that two cycles of The Masked Singer will be overkill for audiences this season. “The Voice has been on two cycles a year for eight seasons, and it’s done pretty well,” said Wade, who noted that after the two-hour season premiere, subsequent episodes will be just one hour each. “Although it’s on twice a year, it’s on once a week, not twice a week.  It’s on for one hour a night, not two hours a night. So we have taken measures to protect it.”

When audiences flock to a series, advertisers aren’t far behind. Strong demand for The Masked Singer helped drive Fox’s upfront this year, and the Fox ad sales team is working with brands on partnerships in both seasons. Those deals, which include custom content for both linear and social, won’t be announced until closer to when those episodes will air.

“We’re keen to find brand partnerships, but at the end of the day, we’re protective of our format,” Wade said. “A lot of brands have come to us and said, ‘We want to do an integration where we put a celebrity in our brand costume, and they sing and you have to guess who it is.’ And we’re like, ‘Yeah, that’s the show. That’s not going to work.’ You have to have brands that are willing to work with you in a way that is going to be additive to the format, or additive to the show, not just a repeat of the show.”

Wade expects more brands to be involved in Season 3 than Season 2, and said there’s “still plenty of time” to lock in partnerships for that third season, which doesn’t film until December.

Will The Masked Singer keep growing?

Buyers expect The Masked Singer to continue to draw large audiences this fall.

“People are already talking about it; they certainly have a great platform with how they’ve been promoting it all throughout the NFL, which is having a great season so far. So I think it will come back strong,” said Carrie Drinkwater, executive director of integrated investments at MullenLowe’s Mediahub.

“It’s something that parents and younger kids like to sit down and watch, and they all get a kick out of it. So I think it will do well again,” said Betty Pat McCoy, svp, managing director and director of investment at Texas ad agency GSD&M. “Will it blow the roof off like it did when it first came out, because it was such a surprise? I don’t know if you’re going to see growth, but I think it can maintain.”

Nick Hartofilis, evp of national investment at Zenith, suggests the caliber of celeb contestants could determine whether the audience grows or falls off in Season 2. “In the second cycle, there’s going to probably be a little more emphasis on who the singers are,” Hartofilis said. “The first run, there was a concept curiosity. If the talents that are coming in are interesting enough, that will determine how it progresses—or regresses.”

Between filming Season 1 in secrecy and trying to convince celebrities to sign on to a reality format that had been a hit in South Korea but was untested in the U.S., Fox said making Season 2 was far smoother.

“It’s certainly been an easier casting process because you don’t have to explain to people what the hell the show is, and the making of the show has been easier because people know what they’re doing,” Wade said. “Now, the contestants really understand the show, so you can make it so much better, because they play along, they’re trying to disguise their voices and personalities.”

However, security has been much tighter given the interest in the show, and the network is doing all it can to keep the contestants’ identities under wraps.

“We’re all playing a guessing game together. If you really want to find out who someone is, with the internet and everything available, you can find out,” Wade said. “But there are people who want to try and work it out themselves, and that’s what you have to hope that the audience is going to do.”