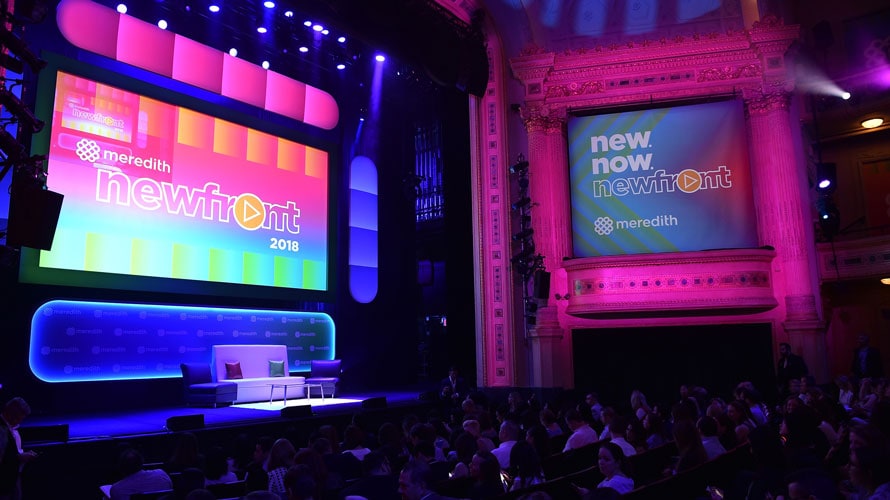 This is Meredith's first NewFront presentation with Catherine Levene in her new role as chief digital officer. - Credit by Getty Images

More than a year after its massive Time Inc. acquisition, Meredith touted its offerings to advertisers at this morning’s NewFront presentation, including leaning deeper into streaming video from legacy brands like People.

Two identical presentations—one at 9 a.m., the other at 10:15—will be held this morning from Meredith’s offices at 225 Liberty Street. It was Meredith’s first NewFront presentation since selling off two of its Time Inc. brands, Fortune and Time, and after deciding to take Money off the market and switch that outlet to digital-only. Sports Illustrated, meanwhile, remains for sale.

As was the goal from the start, Meredith will now double down on its portfolio of mainly lifestyle titles and work to reach that audience—or “her,” as Catherine Levene, Meredith’s new chief digital officer, referred to it.

“Our goal here is to understand her needs, inspire her and entertain her and help her with everyday decisions and drive her to action,” Levene told Adweek ahead of the presentation.

As Meredith heads into this year, Levene said she has three priorities for digital video: expand its longform content, focus on YouTube and OTT offerings and embrace “high-growth platforms.” That also means leaning deeper into content Meredith knows its readers enjoy: entertainment, celebrity news and royals coverage. To meet those needs, Meredith has expanded its daily live show from People, People Now, to the weekend.

The company will continue to experiment putting its programs on varying platforms, including Instagram, which it intends to reach a younger demographic. In all, Meredith will have 20 IGTV series. “The more focused we are, the more likely we are to capture that attention … from younger audiences,” Andrew Snyder, svp, head of video at Meredith, told Adweek ahead of the presentation.

At the event itself, there were whispers from the crowd that they appreciated the smaller audience, which they said felt more like an intimate experience over the big theaters that are sometimes rented out for these NewFront presentations. The early morning hour didn’t seem to bother those who arrived for the sessions, as they drank mimosas and sipped coffee from branded to-go mugs.

Meredith’s NewFront kicks off with a mimosa bar, a selfie mirror and a chance to pose with an Emmy award on the “People Red Carpet” pic.twitter.com/VSy2N4lner

Participants snacked on mini Dough donuts and breakfast wraps while they mingled around a faux red People carpet and a selfie mirror. Clearly, a theme was at play.

As execs said during the presentation, Meredith will look to reach a more multicultural audience through a new series geared toward Latina mothers and, overall, reach more women by covering more of their stories.

That will include stories like Goal Crushers—a series that will spotlight women who achieve their goals—and Badass Women, whose self-explanatory title will be released from InStyle.

Under programming in partnership with #SeeHer, an initiative from the Association of National Advertisers, Meredith will also offer programming featuring Katie Couric and fashion designer Brandon Maxwell. “We’re really pushing into more content featuring women and all of their powerful stories to give them broader coverage in media in general,” Levene said.

Execs also released two new programs from the Money brand, including a show called Money Makeovers about how to be smarter with money, and Mini Moguls, a show highlighting young entrepreneurs.

Meredith is also soft-launching a new ad campaign, called Power Her Possible, which the company teased this morning. The ad campaign is running in trade publications, which will be expanded to other partners next quarter. The campaign “speaks to our unparalleled connection to women and our first-party data to understand and anticipate her needs with predictive insights,” said Alysia Borsa, chief marketing and data officer, Meredith Corp., in an email.

“This last year was a lot of integration, and we’re pretty much over that hump. We can now take advantage of all the assets that we have and invest in them and focus on growth,” Levene said.