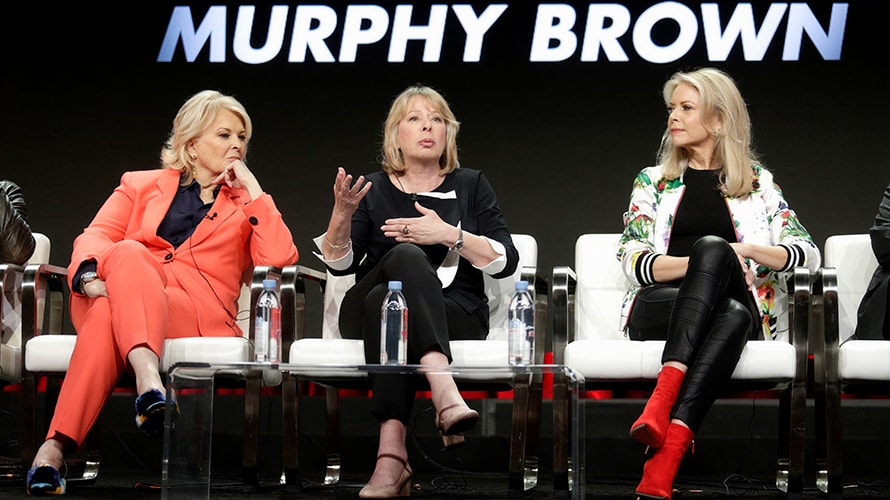 Twenty years after it signed off, CBS is bringing Murphy Brown back tonight, and hopes it will become the latest successful revival. In the new iteration, Candice Bergen’s TV journalist and her team have moved from their 60 Minutes-esque news magazine, FYI, to the morning show for a 24-hour cable news network. Meanwhile, Murphy’s now-adult son, Avery, works for a rival cable news channel, which is patterned after Fox News.

Ahead of tonight’s premiere, creator Diane English spoke with Adweek about bringing the show back after two decades, dangling “red meat” for Donald Trump and the recent exit of CBS Corp. CEO and chairman Les Moonves:

Adweek: You said last month that you first had an inkling to revisit Murphy Brown when Sarah Palin was running for vice president in 2008. When did this idea become more real?
Diane English: Toward the beginning of 2017. I was doing another pilot with Warner Bros. and they said, “Would you consider bringing Murphy Brown back?” And I said, “Well, Candice and I have talked about it, but we dismissed it. We have a legacy and maybe we shouldn’t mess with it.” But they kept at it. And then finally, they said, “If you’re unsure, why don’t we just pay you to write a script and you and Candy can see how you feel about it,” which I thought was a fair idea. Obviously they were very serious about it, because they paid me everything in advance, which never happens! [laughs]

It took you nine months to write that script. What happened?
I worked on the other pilot and then I tried to start it, but I had a bit of writer’s block. Because it’s scary to go back and revisit something that you did 20 years earlier. For me it was longer, because I left the show at 101 episodes, which was [in] 1992. So finally, Warner Bros., who were very nice, said, “Uh, where is it?” [laughs] So right before Thanksgiving of last year, I sat down to actually write it and then it came very easily, much to my relief. I turned it in right before Christmas, and by the first week of January, we had that straight-to-series deal at CBS.

With the new season, how do you balance giving fans some of the touchstones they love while also making the show resonant today?
There’s no reason to come back if you’re going to do the same exact show the same way. With all the time that’s passed, these characters would have evolved. Where were they for the last 20 years, what were they doing? For me, it was very important for the audience to recognize some touchstones. Which would be Phil’s Bar, which remains completely unchanged; those kinds of places don’t ever change. And her townhouse, where she lives. The production designer asked me if she would have repainted or recovered furniture. I said, no.

"We threw a little red meat out there in the first episode, so we’ll see what happens."
Diane English, on President Trump's potential reaction to the new season

And then the big change is that she’s now on a 24-7 cable news network, which is very different than the 60 Minutes-style show that she did. They’re coming into the office at 4 in the morning, they’re on every day and they’re older. So we have a lot of fun with that.

We’ve added new characters, too, who are younger, so that we can get perspectives from millennials and the baby boomers. So that’s new and fresh for us in our writing. And then, of course, coming back at a time when our country has never been more divided, and it seems like all the leadership is in chaos, it just felt like the right time to bring a show back about the press.