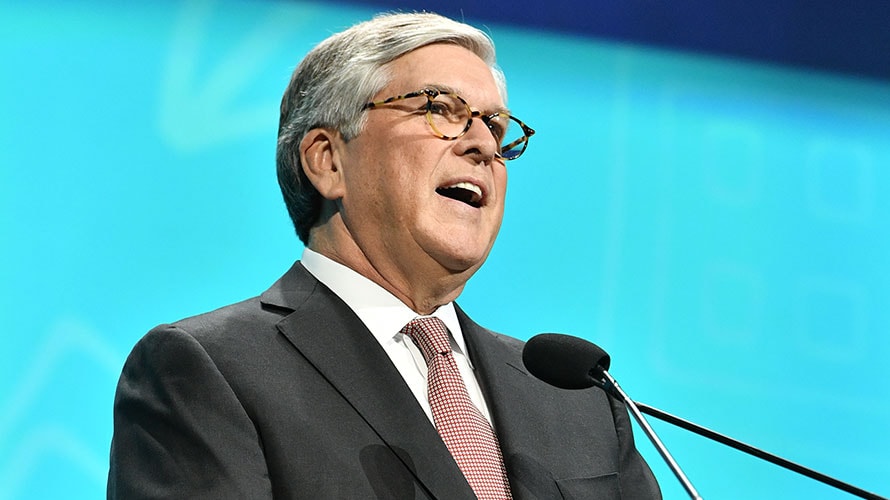 National Association of Broadcasters president Gordon H. Smith kicked off this year’s NAB Show 2019 today in Las Vegas by speaking about the importance of local broadcast journalism as the ultimate way to “inform and help our communities.”

“Your role has become more critical while people search for a trusted source of news,” said Smith, a former two-term U.S. senator from Oregon who joined the organization in 2009. “Americans turn on their televisions to watch their favorite local news anchor and to get an unbiased report of what is happening in their communities. And they turn to their local broadcasters for a lifeline during emergencies.”

However, not all local news is unbiased. There’s the issue of Sinclair Broadcasting that has captured the attention of many in the media industry over the past few years. In addition to its failed acquisition of Tribune Media, the Maryland-based local broadcast company directs its stations to incorporate conservative and pro-Trump commentary into newscasts.

One of the most recent examples is former Fox News personality Sebastian Gorka’s 30-minute special last year about the failures of socialist regimes around the world, titled Inside Socialism. During the special, he remarked: “Can the teachings of Islam and Western values ever be reconciled? Is it possible for the waves of refugees arriving in the West to assimilate and coexist peacefully?'” That’s not exactly unbiased.

Nevertheless, Smith extolled the importance of local broadcast journalism in 2019—and in the future. “To me, the story of broadcasters is a story of everyday heroes,” he said. “What you do day in and day out can be taken for granted as your daily acts of service are sewn into the fabric of American life.”

Smith, the former Republican senator, noted that he rarely agrees with Sen. Elizabeth Warren, but he did admit that he was intrigued by her recent comments about the big tech companies.

“She said, ‘They’ve bulldozed competition, used our private information for profit and tilted the playing field against everyone else. And in the process, they have hurt small businesses and stifled innovation,'” said Smith. “I wonder if this growing tech power is one of the reasons why this consumer benefit is being held back by the manufacturers.”

Smith also spoke about wanting to modernize outdated broadcast regulations so that broadcast can compete on a level playing field with the massive tech and pay-TV companies to better ensure that broadcast journalism can flourish.

Additionally, the NAB wants to increase regulation on the tech industry to ensure that these companies cannot use their market power to stifle competition and the financial viability of local news.

The NAB also honored legendary actor Alan Alda with the organization’s Distinguished Service Award. Alda was on hand to accept the award and later sat down for a chat about his career in television, as well as his thoughts on the current state of media and broadcasting.