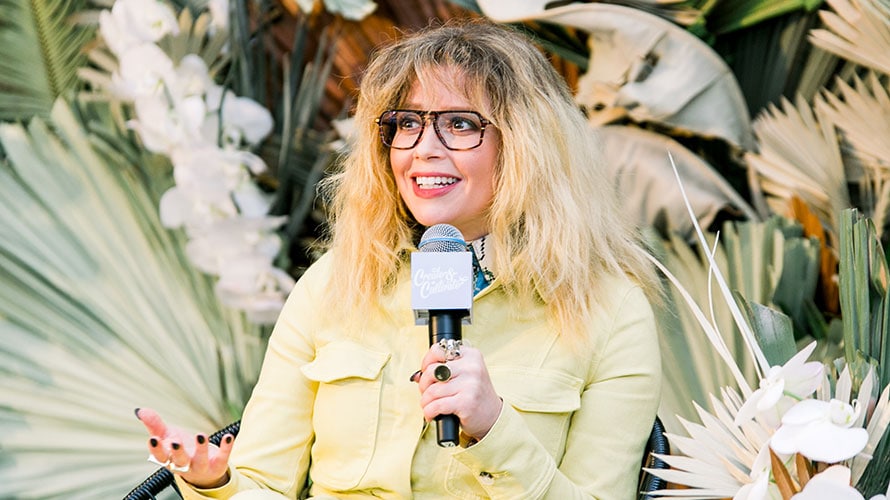 In February, Netflix released the first season of Russian Doll, an eight-episode comedy starring and created by actress Natasha Lyonne. The show, which Lyonne created with Amy Poehler and Leslye Headland, follows Nadia, a 36-year-old New Yorker in the midst of an existential crisis because she can’t seem to stop dying—literally. Russian Doll not only gives Lyonne—who is known for roles in projects as varied as Orange Is the New Black, But I’m a Cheerleader and American Pie—a true showcase as an actor but it also serves as a vehicle for Lyonne to redefine her career as a creator.

Adweek caught up with Lyonne last month at SXSW in Austin, where she spoke at Create & Cultivate’s pop-up. The interview has been edited and condensed for clarity.

Adweek: Before Russian Doll, you got to direct a spot for Kenzo. What was that experience like?

Natasha Lyonne: I’m new enough to all of this that it’s been interesting to see where all the information I’ve been acquiring for years [as an actor on sets] has landed in the pocket of my subconscious.

With the Kenzo thing, I was still a little less bold around telling you exactly what the movie meant to me. What’s funny is that they have some similar threads, and I almost could catalog the Kenzo movie as “daddy issues” and Russian Doll as “mommy issues.” In one it’s Maya, and in the other it’s me.

But both lean heavily on Fosse and Fellini as filmmaking gods to whom I want to bring my sacrifices. Both play with the idea of time and memory, play with the fractured psyche, play with what is health and what is sickness in a sort of human condition narrative. … Music [is shared]. They share a bit of a visual palate, and importantly, the same logo artist, Teddy Blanks. He did the titles for both. He’s incredible. And, of course, Greta Lee.

So Russian Doll has some of the same collaborators of the Kenzo spot.
I think it’s like sort of about finding co-conspirators and keeping hold of the good ones. This new production company—Animal Pictures, my new company with Maya Rudolph—sort of came out of the Kenzo film in many ways. So that was also amazing. And believe it or not, I kept my boyfriend through the whole thing.

It’s rare to see brands create something surrealist like that.
I almost like want to tell my younger self, “What were you thinking? Look at what they’re letting you get away with around here!” I think I was scared for so long. It’s been very moving to experience this new round of becoming a creator and a writer, a director, a filmmaker or producer.

I’ve made so few things, but I’ve been very lucky that Humberto and Kenzo were so game. I thought it was insane when I pitched it to them, too. I couldn’t believe they were letting me get away with it. Then the level of a talent I’ve been able to bring to the table is how this stuff is, of course, getting done.

That kind of ended up tracking with what I was able to pull off with Russian Doll and also that the actors were on board to go on the ride of something that I think was not immediately clear to them.

You seem surprised that people are allowing you to create the work that you want to.
I can’t believe what I’m getting away with making. Even Jenji [Kohan, creator of Orange Is the New Black] let me get away with a few things, which was really fun. I think the truth is—and maybe this goes to sort of the experience of women—it’s been interesting hearing myself talk about work and in some ways undermining things that weren’t quite clear to me early on.

Of course, not everyone does [this] at [New York University’s] Tisch for film at 16-years-old. Do you know what I mean? Like, I knew I wanted to be a filmmaker then and spent a lifetime kind of doing nothing but being in the study of this thing. I mean, my whole trip is really just being fluent in the language of movies.

It’s funny that it’s always the instinct is to, as a woman, act sort of pleasantly surprised by the good fortune or the good turn rather than kind of acknowledging a lifelong obsession and study of a specific craft and media. And finding yourself, 30 years later, situated to actually be a participating member in that, in some ways, it’s fair to want to do more.

"It's funny that it's always the instinct is to, as a woman, act sort of pleasantly surprised by the good fortune or the good turn rather than kind of acknowledging a lifelong obsession and study of a specific craft and media."

Maybe men are better at crafting their own origin story about how it was a trajectory, all along. You were just talking about origin story on stage with Create & Cultivate’s founder Jaclyn Johnson.
If I’m speaking frankly, I think I have more confidence as a filmmaker than I do as an actor. If that makes sense. I guess because I’ve only made three things in that space and they’ve all been sort of concrete in a way as opposed to an acting career that is often been on the margins, putting it gently. But I’m sort of trying to navigate how to speak to a confidence that I have around making things when I historically had felt very humbled by the industry with regards to acting. So I’m trying to separate those ideas.

The three things you’ve been able to direct are of a piece, whereas as an actor you don’t have as much control over your career.
It’s been fun to be more in control. … I’ve made, what?—like almost 100 movies and 10 of them are watchable. It’s true. It’s no reflection on anything in particular, but it’s almost like I would imbue them with this fantasy that maybe they’d be great, maybe there would be this one special or promising aspect in them, only to discover that, sure enough, they did not have that in their future.

It is interesting to go from something with a limited capacity of control where you really just do your small part and walk away to really overseeing an entire thing. It’s very fun. I definitely feel well-suited to it, inspired by it, and I feel very lucky and privileged that I get to do this thing. It’s rare as a person in the arts to get to make anything you want to make.

Do you want to direct anything more for brands? I know Kenzo is probably special.
Yeah, well Kenzo, obviously I’m close with Carol and Humberto and that had emerged because I’d done Carrie Brownstein’s short with them and I’ve been friends with them forever because of Chloë [Sevigny]. I would definitely be curious to do more stuff.

I speak gently around the filmmaking stuff because I want to make sure I catalog the necessary hours in the field. Conversely, I feel very confident [talking about] acting. I’ve put in my hours. I think the perfectionist in me wants to get my time in, which I think is also not very male. Men are like, “Oh, I did something once. I’ll just keep doing it.” That’s not fair. Some men are great. We just have stereotypes. I think it’s important to say that. I love men, so I don’t want to just be making blanket statements because it’s trendy. I think that’s dangerous.

Anyway, on a numbers level, statistically speaking because there were fewer women working in the space, I think it’s scarier for women if you [mess] up once they’ll never let you do it again. It’s a long way of saying yes, I would love to direct more ads because then I would have more experience.