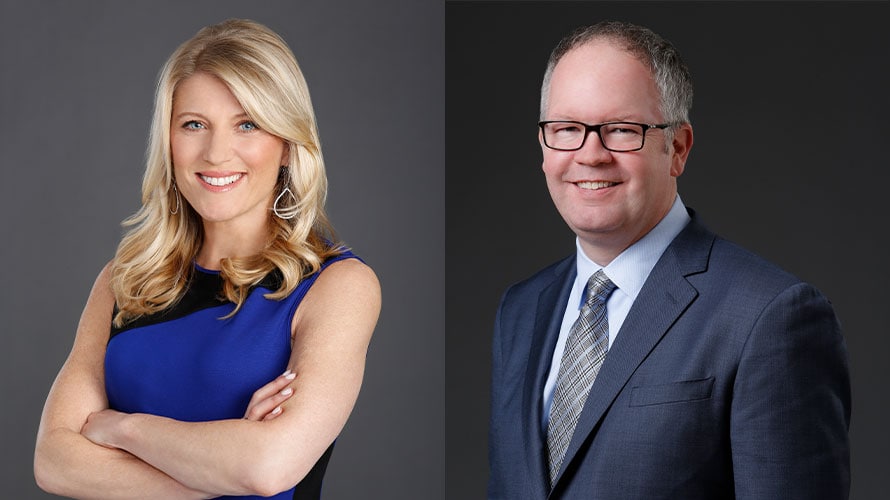 While their boss Linda Yaccarino will be in her usual spot onstage during this morning’s NBCU upfront presentation at Radio City Music Hall, Marshall and Molen—who last October were named presidents, NBCUniversal advertising sales and partnerships—will be the ones actually overseeing this year’s upfront negotiations for the first time. (Yaccarino passed the upfront baton this year because her oversight has expanded to include ad tech, measurement, marketing and monetizing NBCUniversal’s upcoming streaming service.)

Molen and Marshall talked with Adweek about overseeing their first upfront, preparing for “the biggest event in television history,” and the expansion of both NBCU’s “prime pod” premium ad format and its CFlight unified advertising metric.

Adweek: Had the plan for both of you to oversee upfront negotiations been in the works since you were promoted last year?
Molen: When Linda asked Mark and I to take these president roles, she made it clear that while we [each] had verticals that we were overseeing, that we were collectively working on, how do we go to the market as one portfolio together with one voice in service of our customers? Because we are a very big portfolio. This is the seventh upfront going to the market as a portfolio and each year we learn more. What we learned is, clients really do appreciate the portfolio approach in that we can give them really whatever they need. We have great scale, we can do audience buying, we can do content and commercial innovation. When Linda asked us, we knew that leading the upfront would be a big part of that.

There were rumors that the baton had been passed to such an extent that Linda might not even be on the upfront stage. Is that true?
Marshall: That is not true. Linda will play the most significant part of the upfronts presentation. You will see a little blip of Laura and I, but absolutely, Linda will still be the focus.

So you two will make a cameo appearance, whether it’s on stage or in a video?
Marshall: Correct. I don’t want you to get your expectations too high. It’s not Academy Award-winning! [laughs]

Molen: We’re going to be riding the dragons from Game of Thrones. [both laugh]

What is your upfront strategy as you go into this together for the first time, and how is it similar or different to last year’s?
Marshall: Laura and I are playing different roles this year. I think the strategy is similar, which is, continuing along the path of improving the viewer experience and improving the ad effectiveness. And rolling out some products that are going to continue to help along those lines. You’ve heard about our OTT property, so there will be some discussion of that, even though we’re not fully baked on every element of it—all of that won’t be announced. But that will be touched during the upfront presentation. Our goal is to continue with the idea of, how do we continue to make all our assets work harder for our clients’ business? And to move from discussing impressions to, how are we creating real business impact for our partners?

Every year, your company tweaks its upfront event a bit. What is different about this year’s presentation?
Molen: We’re calling it a “celebration of advertising,” and a celebration of the content that hosts that advertising. It will be very entertaining and informative, and celebrate the power of content that NBCU has in an effort, as Mark said earlier, to give consumers great content, but also to give marketers a showcase for that content.

The Summer Olympics will obviously be part of the event, but will they also be a part of upfront talks, given your new, expanded Olympic partnership, spanning four separate Games?
Marshall: Yes, they will be part of the discussions. We look at it holistically. If you look at it across the year on NBC, you have the big tentpoles in fourth quarter being holidays and Sunday Night Football. Then first quarter you have Golden Globes, then you go to Billboard Music Awards, and in third quarter will be the biggest event in television history, the Tokyo Olympics.

Will your use of CFlight be expanded this year?
Molen: Everything now will be measured through CFlight in the portfolio, whereas last year it was just prime and sports.

Marshall: We’re excited to see our corporate cousin Sky picking up CFlight over in Europe, as well as Viacom.

Are you already doing that in scatter, or will that shift happen for the first time in the upfront?
Molen: We’ve been doing it in scatter, working with marketers to buy across all platforms. It’s not been holistic, but more and more, marketers are recognizing that the available impressions are across many platforms, and appreciate that we’ve found a way to measure them in one, unified place.

Whether you’re watching This is Us on Tuesday or whether you’re watching it the following Monday, we want advertisers to understand that the value of prime time television goes well beyond the 8-to-11 time period
Mark Marshall
@jasonlynch jason.lynch@adweek.com Jason Lynch is TV/Media Editor at Adweek, overseeing trends, technology, personalities and programming across broadcast, cable and streaming video.