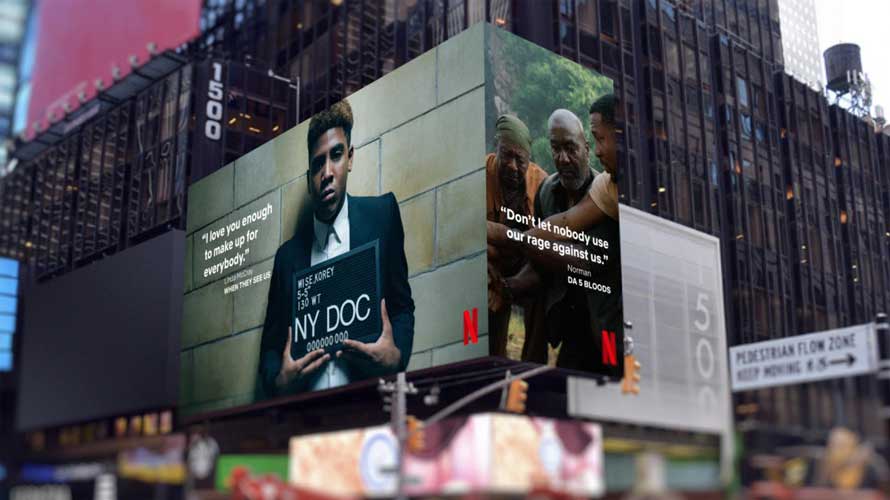 Traditional and digital out-of-home ads will promote titles like When They See Us and Da 5 Bloods. - Credit by Netflix

Last week, Netflix rolled out a Black Lives Matter programming collection highlighting stories of racial injustice on the streaming service. Now, the collection is getting a big out-of-home push.

The streamer is launching an out-of-home campaign highlighting four of the titles in its Black Lives Matter collection, including the documentary 13th, the miniseries When They See Us, the television series Dear White People and the recently released Spike Lee film Da 5 Bloods.

Ads will appear this week in locations around Los Angeles and New York, including Times Square.

The push comes as Netflix is reporting higher-than-usual interest in some of those titles, including 13th, an award-winning 2016 documentary about the history of racial inequality directed by Ava DuVernay. There’s been a 4,665% increase in interest in the title on Netflix, the company said this week.

In the last 3 weeks, millions of members (a 4,665% increase vs. 3 wks prior) have sought out 13TH, Ava DuVernay’s essential doc about the intersection of race, justice, and mass incarceration in the US.

The film is also available for free on YouTube as an educational resource. pic.twitter.com/EYOVgHaV82

In April, Netflix made the documentary available to watch on YouTube for free as an educational resource.

The campaign also follows a $5 million donation from the streaming service to support several nonprofit organizations. The company has allocated $3 million of those funds: $1.5 million for organizations aimed at helping Black creators, including Black Public Media, Film Independent Project Involve, Firelight Media and Ghetto Film School; $1 million will go to organizations aimed at supporting Black youth, including Black Girls Code; and $500,000 will go to the Vermont Slauson Economic Development Corp., which will distribute funds to Black-owned businesses in Los Angeles.

“Tackling racism and injustice in meaningful ways means creating long-term opportunities for the Black community,” Netflix CEO Reed Hastings said in a statement about the donations. “The main role we play is through our funding of and member viewing of important content like When They See Us. As an additional step, today we’re committing $5 million to nonprofits dedicated to creating direct opportunities for Black creators, Black youth and Black-owned businesses.”