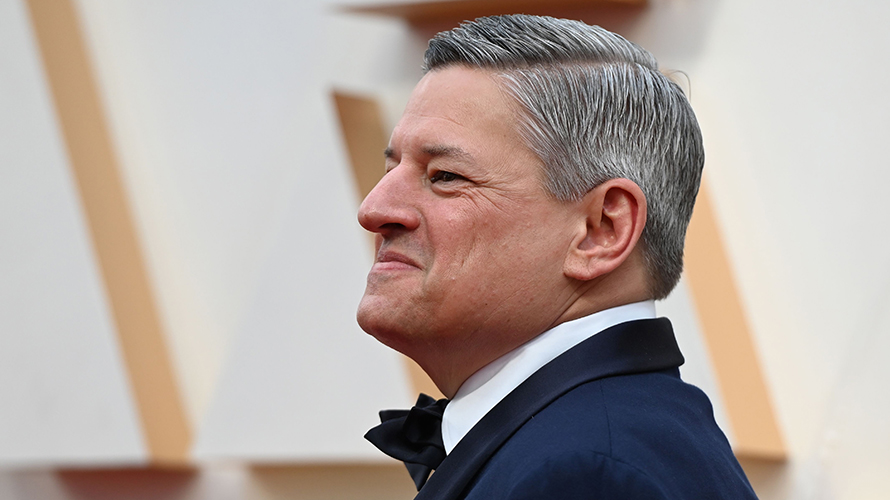 “This change makes formal what was already informal—that Ted and I share the leadership of Netflix," said Reed Hastings of his new co-CEO. - Credit by Getty Images

The appointment means Sarandos, who has been with Netflix for more than two decades, will helm the streaming service alongside founder and CEO Reed Hastings. Sarandos has also been elected to Netflix’s board of directors. He will continue to serve as chief content officer, overseeing all programming decisions.

“This change makes formal what was already informal—that Ted and I share the leadership of Netflix,” Hastings said in a statement. In an investors interview Thursday evening, Hastings said he would still be at Netflix “for a decade,” and that the co-CEO structure would help the company “grow even faster over the next 10 years.”

The new appointments atop the streaming giant come following another major quarter, as the seemingly ceaseless Covid-19 pandemic has prompted record streaming viewership around the country and world. Netflix reported 15.7 million new subscribers last quarter, nearly double its expected global subscriber growth, but told shareholders at the time that the temporary spike in viewing and membership growth would likely decelerate as home confinement ends.

That hasn’t happened yet, and the streamer is again beating its own estimates. This quarter, the service netted 10 million more global subscribers compared to the 7.5 million it had projected. In the U.S. and Canada, the streamer brought in 2.9 million paid streamers, pushing total subscribers in the region to nearly 73 million. That means the streaming giant now has nearly 193 million subscribers, an enviable figure for the increasingly numerous rivals in the streaming space that are also hoping to take their own share of paid streaming consumers.

Those subscribers seem to be sticking customers, Netflix chief financial officer Spencer Neumann told investors. “They’re highly engaged, and retention across every cohort is as good or better than pre-Covid,” he said.

With subscriber growth also comes spikes in revenue, which grew 25% year-over-year to $6.1 billion. Operating income was also up to $1.4 billion, and marketing spend was down slightly due to the pandemic’s effects on in-person press junkets and other more usual promotions. The company, though, slightly missed earnings per share.

As restrictions ease in some countries and in some states in the U.S., the streamer is expecting to see a contraction in the second half of the year. The streamer already saw some slowdown in June and is only forecasting 2.5 million paid net additions for the third quarter, compared to the 6.8 million it reported in the third quarter last year.

But Netflix is still not expecting to have the pandemic disrupt its production calendar as much as it has some newer streamers like Peacock and HBO Max. Netflix’s production works into the future, Sarandos told shareholders last quarter, meaning that most filming and production work has already been completed for the 2020 slate.

And productions that did pause only saw minor delays. “For 2021, based on our current plan, we expect the paused productions will lead to a more second half-weighted content slate in terms of our big titles, although we anticipate the total number of originals for the full year will still be higher than 2020,” the company wrote in its shareholder letter.

Production has resumed in some parts of the world, primarily the Asia Pacific region, but also in countries like Germany, France, Spain, Poland, Italy and the U.K. However, the company is less certain about its U.S. slate. “While we recently resumed production on two films in California and two stop-motion animation projects in Oregon, and expect some more of our U.S. productions to get going this quarter, current infection trends create more uncertainty for our productions in the U.S.,” the company wrote.

To round out its content slate and account for any production challenges, Netflix has added some additional big-ticket acquisitions, including Aaron Sorkin’s The Trial of the Chicago 7 and the unreleased third season of YouTube Premium original series Cobra Kai, which is moving to the platform.

Netflix counts a view as when a household watches two minutes of a program, a somewhat recent change made in January, which means those figures are about 35% higher than its viewership metrics from previous years.

Peters, who last quarter dismissed questions about price increases, said the company would make such decisions on a case-by-case basis, when metrics like engagement and churn offer “signals” to the company.

The numbers are another win for Netflix, as it has been staring down deep-pocketed competition when new services from traditional television giants, including Peacock and HBO Max, both came into the market this year looking for footholds in the streaming wars. But Netflix, by far the most established of the services, continues to brush off competition.

“All of the major entertainment companies like WarnerMedia, Disney and NBCUniversal are pushing their own streaming services and two of the most valuable companies in the world, Apple and Amazon, are growing their investment in premium content,” the company wrote in its letter to shareholders. “In addition, TikTok’s growth is astounding, showing the fluidity of internet entertainment. Instead of worrying about all these competitors, we continue to stick to our strategy of trying to improve our service and content every quarter faster than our peers. Our continued strong growth is a testament to this approach and the size of the entertainment market.”

On the call with investors, Hastings said he recognized that consumers would occasionally go to other services, like Disney+, to watch television events like Hamilton, but that he wanted Netflix to be the default streaming service.

“For the most part, we want to be the one that can always please you with a convenient, simple, easy choice,” he said.