Q&A: Comscore’s President on Tackling the Hurdle That Is Cross-Channel Measurement

We caught up with Sarah Hofstetter at Brandweek: Challenger Brands 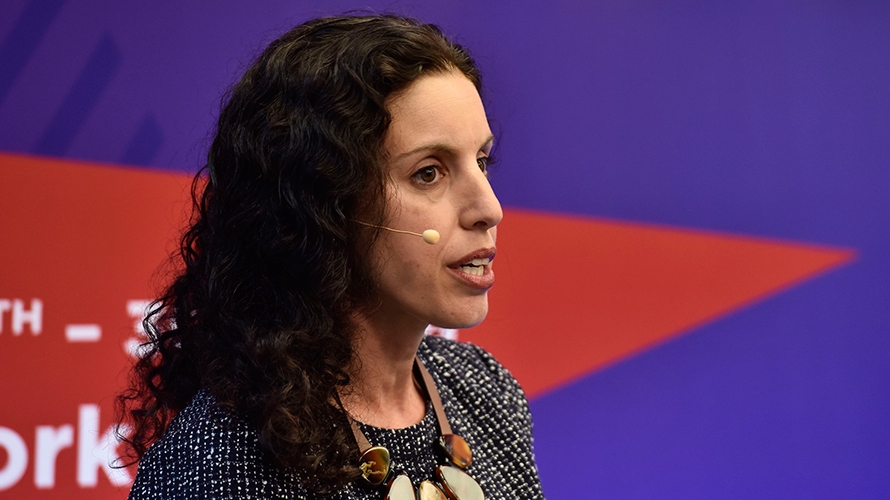 With media companies urgently seeking more accurate methods of measurement across all platforms, Sarah Hofstetter clearly has her work cut out for her.

The Comscore president oversees commercial strategy, direct sales and marketing efforts at the cross-platform measurement company. She joined in October from 360i, where she had worked for more than a decade. Adweek caught up with Hofstetter at its Brandweek: Challenger Brands event earlier this month, and chatted with her about how she views her company’s mission, the challenges associated with measurement and how she sees it changing this year and beyond.

Adweek: What does measurement look like in 2019 and how does Comscore keep up as viewing habits change?

It is kind of surprising we haven’t gotten there yet. There’s so much that needs clarifying, where do you even start?
One of the historical barriers had been the diversity in format, because they were different formats, you can’t create the right weighting scale. How do you evaluate the efficacy of a six-second ad on Twitter versus a 30-second spot on television? The truth is it’s not nearly as complicated as people think, but people go, “Oh no, it’s too different to measure.”

It could be a six, a 15, a 30 or a 60 [ad]. But in the end, it’s premium video advertising against premium video content. Until very recently, since we launched it, there wasn’t a uniform way of looking at viewability and impressions and measurement across TV, desktop, mobile and OTT. So even being able to do that, that’s new.

People would count the numbers, but they would add on each other. They wouldn’t unduplicate, which means you’re stacking numbers, which also means that you have a real hard time knowing where the impact is coming from.

And then communicating that to advertisers.
Exactly. Advertisers may not realize that maybe they’re hitting the same person over the head with the same ad a hundred times and they’re missing the person next door that fits the same profile.

Has measurement always been this much of a challenge, as new technologies have come online?
The issue of measurement has reached a fever pitch because of the move of dominance of certain media companies. Now the question becomes, how do we create a standard by which we can measure, not grading our own homework, but more looking holistically so that we can better give value, where value is due? I think that that has really driven much more accountability. We’re at the Challenger Brands conference; we’re hearing about upstarts disrupting the environment. That’s what’s happened to a lot of big Fortune 500 advertisers. Big companies are trying to figure out how to outsmart without outspending the competition. And they’re playing very different games.

If you listen to anything that probably was said today by challenger brands, they’re starting with performance marketing, which is highly measurable and they’re working their way up into brand advertising. And if you look at the history of big brand advertising, they start with brand advertising and then sometimes they go deeper down to performance media to kind of close the loop.

There’s a completely different way of looking at it. Because the DTC companies are looking at starting from a performance perspective, that’s making everybody look at the granularity of their advertising as well. It’s not one cause that’s driving it; there are multiple. I think TV networks in particular are looking to have the same degree of measurement and accountability as digital is and I think it’s great. So that’s also a big driver. Streaming is another driver, there are a lot of drivers.

Think about streaming. What has streaming done? Streaming has caused a tremendous increase in usage and shift of usage to on-demand viewing. On-demand viewing has a very different ad model: either it’s subscription or it’s ad-supported. Because of that, the measurement components end up changing and time shifted viewing and DVRing, is causing people to look more carefully at what’s actually being used versus skipped.

So is there hope in being able to measure this all accurately?
Of course! That’s why I joined Comscore. I really thought there’s so much opportunity to solve these problems more holistically. And I think being an outsider, being an unbiased third party, allows you to do that. Of course there’s hope for us, but there wasn’t necessarily exciting competition in the marketplace until recently.

In terms of streaming, the flood of OTT content and publishers’ increasing production of video, the definition of TV seems to be changing. What does TV mean anymore?
I call it convergent TV. The television set is a mechanism for delivering. The content that’s coming into that can come from anywhere. Roku’s got their own channel, Samsung’s got their own channel. And then there’s obviously all the streaming and over-the-top services and there’s the linear networks. The TV is just the box. It’s not a mechanism for delivery.

But with all this gray area that does exist, who do you see being responsible for setting the standard and defining what these terms mean for the industry?
I do see part of that as my responsibility, as Comscore’s responsibility. It’s not just measuring, but knowing what to measure and how to give it the right nomenclature.

I do think that it is a third-party measurement company’s job to create the reconciliation between buyers and sellers so that we have right definitions. Maybe convergent TV is the first word, but I do think that creating new nomenclature, creating a taxonomy, those are the kinds of things that we need support from the industry to do it, but if one agency does it another agency won’t, one brand does it, another brand won’t, one publisher does it, another publisher won’t. We need that industry leadership to be able to do that.