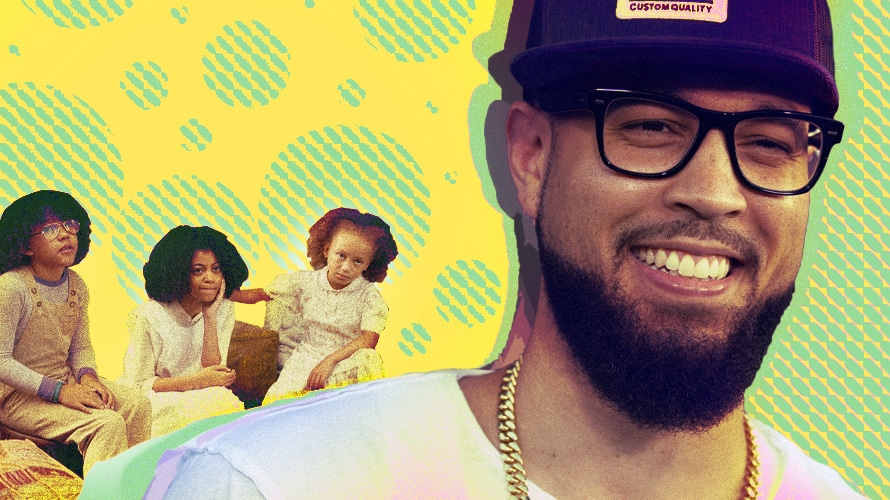 Five years after its debut, Black-ish has become a full-fledged TV franchise. Last year, the ABC comedy launched a spinoff, Grown-ish, which followed Yara Shahidi’s character, Zoey, as she entered college. Tonight, a second Black-ish spinoff debuts on ABC, and is one of fall’s most promising new shows.

The prequel, Mixed-ish, follows Rainbow Johnson (Black-ish’s Tracee Ellis Ross, who narrates), as a 12-year-old in 1985, struggling with growing up in a mixed-race family after relocating from a commune to the suburbs.

The new show was created by Kenya Barris, who created Black-ish—which was based on his family—and Peter Saji, who in his five years as a writer and executive producer on Black-ish wrote several of the series’ most memorable episodes, including “Juneteenth,” “Black Like Us” and the Prince tribute, “Purple Rain.”

Saji talked with Adweek about his approach to Mixed-ish, potential ’80s brand integrations, the TV spinoff he hopes to emulate, and his reaction to a pair of Adweek columns about the prequel.

Adweek: The pilot was supposed to air as a Black-ish episode last season. Was it always conceived of as a “backdoor pilot” that could become its own show?
Saji: Kenya had already had that success with Grown-ish, doing that, and so that was the strategy for this as well: do it as an episode of Black-ish, but then hope that it’s good enough that it becomes its own series. When it didn’t air [last season], they promised us they loved it so much, they just didn’t want to air it right then. But it turns out they were telling the truth.

Were you surprised when ABC gave the show an early series order?
I’ll be honest, it happened so fast that there wasn’t an opportunity to be surprised. As one of my mentors said, to anyone who gets their own show, it’s like, “Congratulations; you’re already behind!” The moment that happens, you switch into gear of getting all the pieces together, and staffing. So there wasn’t really an opportunity. It happened so fast that it won’t be until hiatus that I realize, “Wow, that was crazy.”

What did you think when ABC said you were leading into Black-ish in the fall, instead of them leading into your show, which usually happens with a spinoff?
What they told us at upfronts was that in the history of the medium, we were the first spinoff to lead into the flagship show. That just made me nervous [laughs] because that feels like expectations I might not be able to meet. But yes, I was surprised, and then when it was put that way, it’s even more surprising.

Even though the show is set in the ’80s, it won’t be a Goldbergs-like take on pop culture, right?
Right. The best example is if we were going to talk about an Eddie Murphy movie, it would be because that makes Johan [the sibling played by Ethan William Childress] want to try to be like Eddie Murphy, and what that means culturally. That type of comedy, and how the parents feel about that type of comedy, and what that means, as opposed to just, “Remember Eddie Murphy?” It won’t be that type of thing. It will be able about how cultural moments affected this family.

One reason Kenya had Black-ish’s Dre work at an ad agency was because it would be easier to work integrations into the show. That’s more difficult with a period piece, but would you be open if someone wants to work an ’80s version of their brand into the show?
As of right now, you’re talking to a person that hasn’t yet been beat down by potential budget cuts and things like that. We would love to do anything that helps to tell the story. Sometimes shows get to places where you have a hard choice between staying on the air and making a tough decision about an integration. I would love for every integration to make sense to the period; that’s the hope. Again, going back to the pop culture of it all, it’s not as interesting to be like, “Hey, here’s a Sony Walkman.” But it’s more interesting to be like, OK, why does he want this? When people come from the commune, why does this mean something to them? I would love to do those types of integrations.

You have said the show will try to make the present relevant through the past, and after seeing the pilot and what’s going on in society with people who look “different,” it seems like there will be no shortage of modern-day parallels.
Absolutely, but we want to do that with a variety of topics, like the environment. You can find a lot of parallels from now to then. We don’t have a political agenda or anything like that. The goal is just that, as much as things change, they also stay the same. We want to use it, not so much as any type of preaching, as more of just using 1985 as a character and giving people entry points by showing them the parallels to the present.