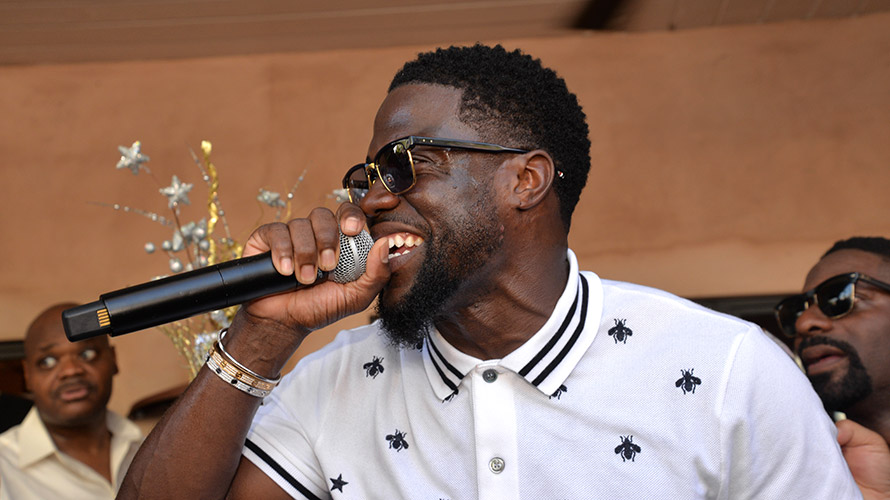 Kevin Hart’s career has taken him from stand-up comedy to hit movies (most recently Jumanji: Welcome to the Jungle) to modeling Tommy John Underwear. But there was one place the comedian had never been until now: a frigid ice bath. That changed with his aptly named Cold as Balls sports interview series for his comedy video network, Laugh Out Loud. In the new series, Hart hunkers down in the chilly water to interview athletes including Blake Griffin, Hope Solo, Lindsey Vonn and DeSean Jackson.

Adweek spoke with Hart about his varied career, Laugh Out Loud, his love for his hometown of Philadelphia and his drunken Super Bowl shenanigans.

Adweek: Let’s talk about the premise behind Cold As Balls. Who came up with the idea for this show—namely, the whole soaking-in-an-ice-bath part?
Kevin Hart: We had two amazing producers that contacted me with an idea for a show. I said it sounds great. I agreed to go through with what the idea was and figure out a way for us to make it bigger and better. We all were on the same page, and we ended up doing the show.

It’s a really interesting topic in particular, because sports interviews are notorious for being bland. What do you hope to add to sports with your show?
It’s about finding ways to mix it up. You can always do what’s been done, or you can find a way to be creative and take them outside the norm. In this case, taking it outside the norm was just putting me in a cold tub, putting me in the position to have conversations that weren’t expected. The water, the environment that we created—[these aspects] just added to the levels of fun that we were putting ourselves in the position to give.

Who’s the funniest athlete that people wouldn’t expect to be funny?
Damn, there’s so many. Carmelo Anthony, [Kevin] Durant, [Russell] Westbrook … you’re looking at a bunch of people that are very personable, on and off the court. So when you can put yourself around those individuals, and you know those individuals don’t shy away from taking a moment to be themselves, once again, you put yourself in a great situation. This is one of those situations.

How would you describe most of your interviews for the show? Are they mostly pretty light and funny, or do you get into any heavier topics?
Yes. Well, not heavy, not heavy to the point where it’s not entertaining. We get into topics that everybody … can relate to. I think that’s where you get fun. That’s where you get funny. That’s where you get comfort. Once [the athletes] feel like they’re at a very high level of comfort, once they feel like this is an environment [where] they’re not going to get hit with questions that could possibly shake them up to where it’s not fun, then they’re more willing to have fun. I have to hold to my job to set that tone and create that environment for us to play on and make the most out of.

In the coming months, you’re also coming out with What the Fit, another series in which you team up with celebrity friends—but this time, out of the ice bath and in the gym for some particularly grueling workout routines. What’s the most ridiculous or funniest celebrity workout you’ve experienced for the channel so far?
There were tons of them that were pretty stupid. [We] did one that really was far out there, which was goat yoga. We did yoga, but it had goats around! Which I’ve never heard of, but it’s a real thing. We just wanted to find some of the craziest things people could do and shine a light on it, and in this particular case, we did. I think we got great moments out of it. All the people we had that were involved, they all stepped up and came and had fun.


What have you learned from launching Laugh Out Loud?
It’s all a learning process. Nothing happens overnight. As you go on, as you do things, you get more comfortable. When you get more comfortable, you put yourself in the position to win, to do more, to have more. In this case, I’m learning about the streaming service. Every day as the CEO, I’m learning how to incorporate my team as much as possible. You can’t do all this stuff by yourself. You need a team of people that get you, that get your vision, that believe in it, that are willing to put in their all to help you accomplish the goals that you set out to accomplish. I have that in my team.

Old Spice is sponsoring Cold as Balls. What’s your role in the partnership, and how will the brand be incorporated into the show?
We’re finding ways to incorporate the product and brand where it makes sense. You don’t want anything to come off forced or to throw the ad in your face. The [partnership] between Old Spice and myself [is] seamless. You understand it, and the brand also understands it. I think authenticity [is essential]. Creating as many authentic moments as you possibly can is what our goal at hand is.

You’re known for your varied talents across the entertainment spectrum: stand-up, film, TV and even a bit of music and modeling. Do you enjoy keeping your career varied, and will you continue to do so?
I think it’s really important to spread yourself out. As you grow, and your career grows, and the more doors you open for yourself, the more that you’re basically opening for your brand. At the end of the day, Kevin Hart is more than a comedian, more than an actor—he’s a business. If I can open up those doors and create more opportunities for myself personally and from a business perspective, that means I’m basically setting myself up to win. I don’t want to go backwards; I want to continue to move forward. Doing all these things helps me move forward.

All I can do is laugh....We had a blast yesterday at the game. I treated my entire team to the Superbowl....I love the shit out of my brothers!!!! This tour is about to be insane....Click the link in my Bio & get your tickets to my "Irresponsible Tour" ASAP!!!!! #irresponsibletour #ComedicRockStarShit #LiveLoveLaugh #ImDoneDrinkingForaLongTime #ImStillHungOver .....P.S me in the huddle with the players might be the funniest shit ever.....I still can't believe we won the Superbowl....Im so damn happy for my city!!!!!!! Get yo tickets damn it!!!!! #irresponsibletour .....P.S again....Peep the way I told my security to stop worrying about me and to stay with my wife and then I got jumped by the football players in the huddle....I got pissed when they rubbed my head for some reason???? I cant stop laughing ????? #irresponsible

[laughs] It looked like it!
It was great because of the people of Philadelphia. I’m from Philadelphia, and my team won the Super Bowl for the first time in history. We go hard in Philadelphia. … I celebrated as hard as I could because it’s what we deserved. I am Philadelphia. I bleed Philadelphia, which is why you saw me in the light that you saw me. If I could do it all over again, I would do the exact same thing. I wouldn’t take anything away.

Will you be in the Philadelphia Super Bowl parade on Thursday?
Thinking about it! My schedule may not [work], so I’m to trying to figure out what I can move around.

Beyond Super Bowl shenanigans, you’ve taken pride in your Philly roots in your stand-up as well. How has your home city influenced your work?
My home city is responsible for me and my growth as a talent. I wouldn’t be the person I am today if it weren’t for Philadelphia. Philadelphia is where I got my tough skin, to be able to deal with the level of lows that you take in this business. Philadelphia and Kevin Hart go hand in hand. Being a part of it, making sure the younger generation of Philadelphia knows they can do whatever they put their mind to, that’s a priority and something I take a lot of pride in. And I will forever do so. I am Philadelphia.

@sammynickalls sammy.nickalls@adweek.com Sammy Nickalls is a freelance writer and the former departments editor at Adweek.