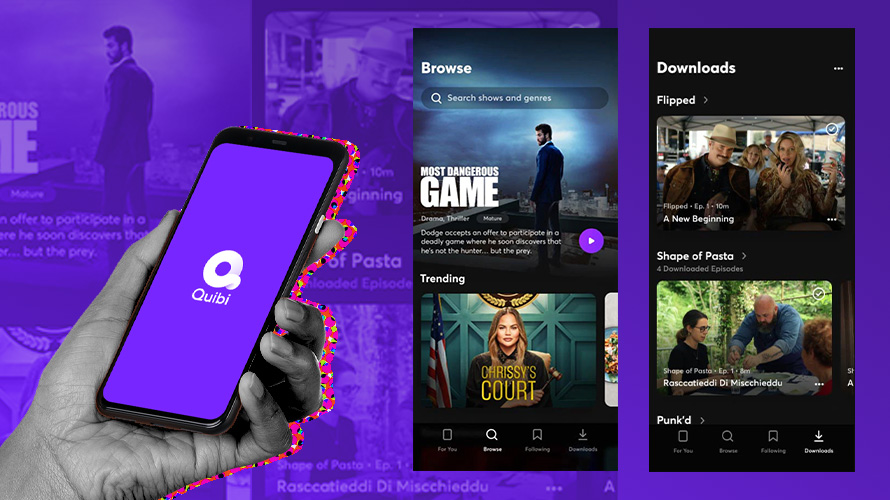 Quibi said it has banked enough original programming to last through Thanksgiving. - Credit by Quibi

Quibi, the much-anticipated short-form streaming service featuring high-end, mobile-only programming, is finally here, arriving in an already crowded streaming market that has been upended amid the continued spread of COVID-19.

As a result, the platform—which was created and has been marketed to on-the-go audiences—has had to revamp its campaign in the home stretch now that those potential subscribers are housebound and no longer on-the-go.

The streamer, helmed by longtime Hollywood creator Jeffrey Katzenberg and former Hewlett Packard Enterprise CEO Meg Whitman, is debuting today with 50 original series that run the gamut: unscripted shows helmed by celebrities like Chance the Rapper and Chrissy Teigen will exist alongside thriller series starring Sophie Turner, plus daily news updates from broadcasters like BBC News and CBS. For all non-news content, the first three episodes will be available on day one, and subsequent episodes or chapters will be released daily.

The Quibi app is available to download in ​Apple’s App Store​ and ​the Google Play store​. While the service costs $4.99 a month with ads and $7.99 without, Quibi is offering a 90-day free trial for users who sign up on its website with their email addresses before the end of the month. Certain T-Mobile users will also receive a free year of Quibi’s ad-supported tier.

Quibi had a unique pitch for its debut into the competitive streaming landscape: Hollywood-level production and episodes that clock in at 10 minutes or less, designed for people to watch on the go. But as the spread of COVID-19 continues disrupting the lives of people across the country, Quibi is now debuting in a vastly different world: 0ne where most of its target demographic is now stuck at home.

“Obviously, people are not on the go right now,” Whitman, Quibi’s CEO and co-founder, told Adweek. “But we did a little bit of consumer research, and while people aren’t waiting in line at Starbucks or at the dentist’s office, people do still have those in-between moments: in between Zoom calls, or in between home-schooling the kids, when you’ve got a 10- or 15-minute break.”

The pandemic has required Quibi to shift its marketing plans considerably. The streamer had prepared to show off its programming at the canceled South by Southwest festival in Austin, Texas, and had planned a glitzy red-carpet event in Los Angeles for April 5, the day before its launch. Quibi had also planned a major marketing campaign around live sporting events including March Madness and the Final Four. Those were all canceled amid lockdowns and stay-at-home orders.

“We don’t quite know what to expect since we’re launching in such an unusual moment. But we’re building this business for the long haul. It’s a marathon, not a sprint.”
Meg Whitman, Quibi CEO
Instead, the service has shifted marketing and promotion efforts to digital, with ads running in even greater numbers on competing streaming services like Hulu and Roku, as well as social platforms like Instagram and TikTok, with some traditional television buys, Whitman said.

This week, Quibi’s celebrity stars will host Instagram Live videos where they talk about their shows and the platform with one another, part of an effort to capitalize on Quibi’s considerable star power to get the word out.

Quibi has been working with its 10 launch partners, including companies like AB InBev and PepsiCo, whose advertising spend comprises the service’s first-year $150 million advertising inventory. (In total, 22 brands have signed on to advertise on Quibi.)

Partners like Google and Walmart have adjusted their creative as recently as last week in light of the pandemic, and Quibi extended its creative deadlines so brands had ample time to update their messaging.

“Every brand—Quibi included—is taking this day-by-day, and the conversations have been ongoing,” said Nicole McCormack, Quibi’s head of advertising partnerships. “It’s been this mad scramble, but it’s amazing how well we have all transitioned.”

Quibi has enough programming in hand to make it through Thanksgiving, a key selling point for the service as production across Hollywood has come to a standstill. The live daily news programs has shifted to almost entirely remote work.

Of the 25 “daily essentials” programs Quibi had planned for launch, all but one will debut today, broadcast out of newly constructed home studios, Whitman said.

Other features about Quibi will remain the same even amid the coronavirus-related market changes. The service is still mobile-only—with no apps available on connected TV devices like Roku or Apple TV—and the company does not allow viewers to cast programming onto televisions. (That’s primarily because Quibi’s programming and ads can be watched in either landscape or portrait mode.)

That said, Quibi’s team will spend the coming days and weeks examining viewership data to understand consumers’ habits, and its offerings may adjust accordingly, Whitman said.

Quibi’s team will monitor free trial sign-ups and app metrics to gauge the platform’s early success. With Quibi’s anticipated use cases up in the air, there’s an added layer of uncertainty about what the service might see in terms of consumer response and viewing habits.

“We don’t quite know what to expect since we’re launching in such an unusual moment,” Whitman said. “But we’re building this business for the long haul. It’s a marathon, not a sprint.”

Despite the uncertainty, there’s an opportunity to capitalize on surging interest in streaming and entertainment. Americans streamed 85% more minutes of video in March compared to a year prior, according to Nielsen, and binge-watching is also spiking across various streamers. With its own short-form offering, Quibi is hoping to break through.

“People are looking for inspiration, for information and for entertainment in this moment,” Whitman said. “We’re not health care workers, we’re not first responders. What we are is entertainers, and if we can bring another laugh or smile or joke, or have people learn something new, we thought we should go ahead and do that.”