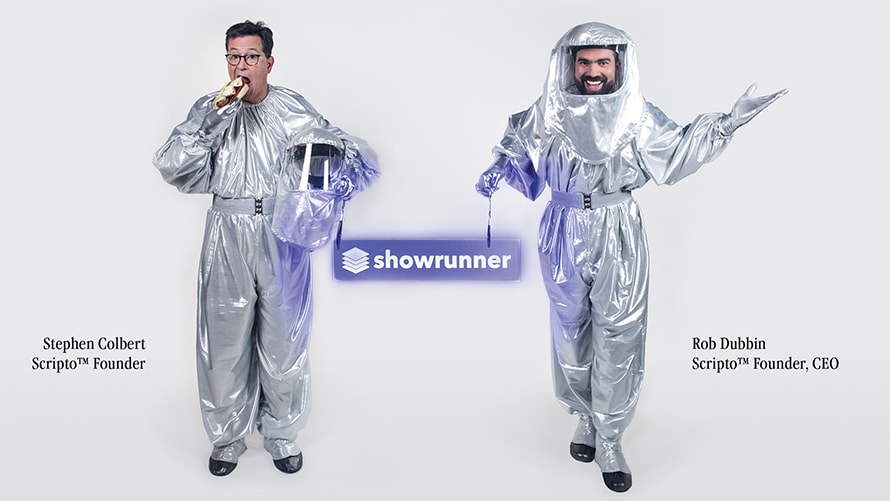 This is the second year that Stephen Colbert and Rob Dubbin have run an ad for their company in the Emmy program.
Scripto
Share
By Jason Lynch
|
September 13, 2018
Share

Stephen Colbert will star in a new ad during Monday night’s Emmy Awards, but it will only be seen by ceremony attendees at L.A.’s Microsoft Theater, not the TV audience that will be watching on NBC.

Instead, The Late Show With Stephen Colbert host, who emceed last year’s Emmy ceremony when it aired on CBS, appears in an ad that is part of the official Emmy program, touting a product called Showrunner. It’s a new collaborative screenwriting software from his tech company, Scripto, that helps TV writing and production staffs work faster and more efficiently together.

In the full-page ad for the Emmy program, Colbert and Rob Dubbin— a former Late Show and Colbert Report writer who is Scripto’s CEO and co-founder (alongside Colbert)—spoof the Intel “bunny people”: the dancing, “bunny suit”-clad mainstays of Intel’s Pentium campaign for years, beginning with a 1997 Super Bowl ad for the Pentium MMX.

Colbert, however, has removed his “bunny suit” to eat a meatball sub. The ad’s slogan: “Make Television Without Skipping Lunch.” 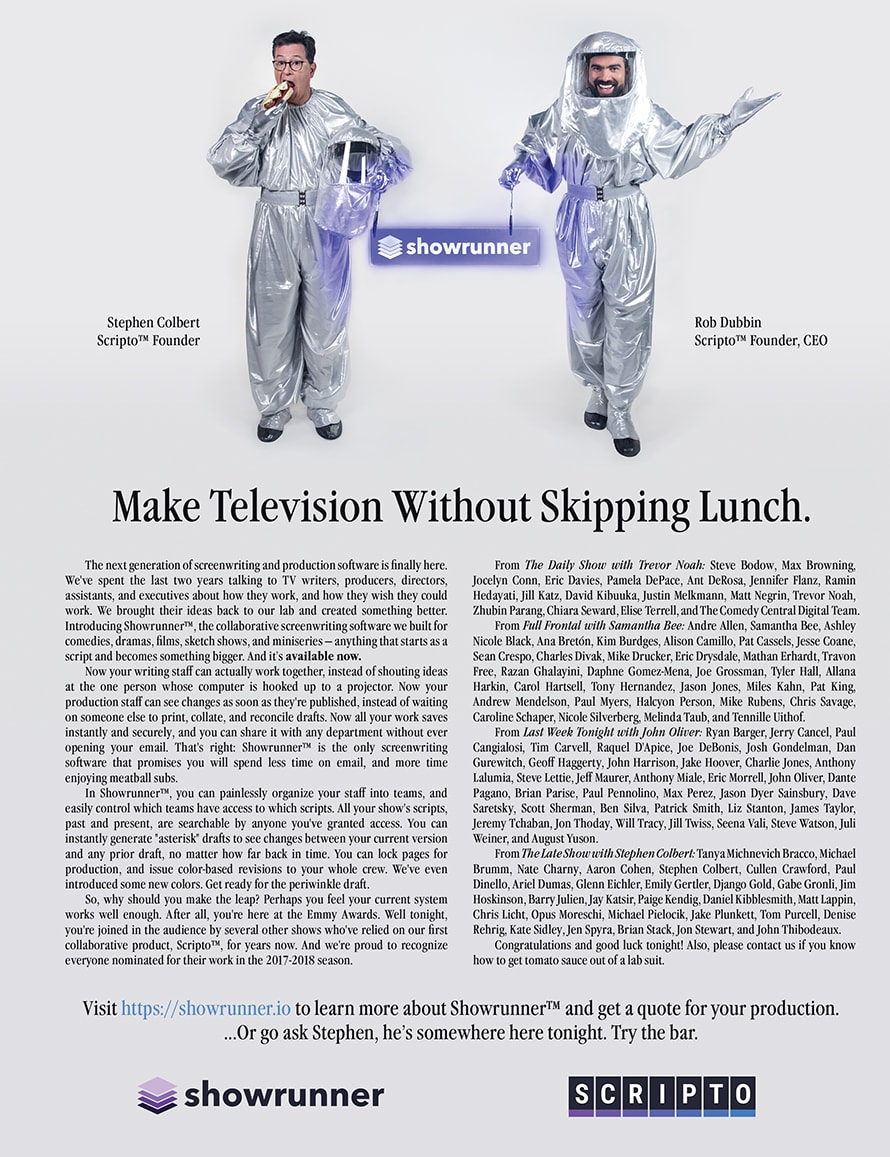 “We knew we wanted to do something different, so I thought of those old Intel ads with the people in the bunny suits,” said Dubbin. “I pitched that to Stephen, and he was like, yeah, but we’ve got to have meatball subs so that we can be dirtying up the sterile suits a little bit. And I loved that.” 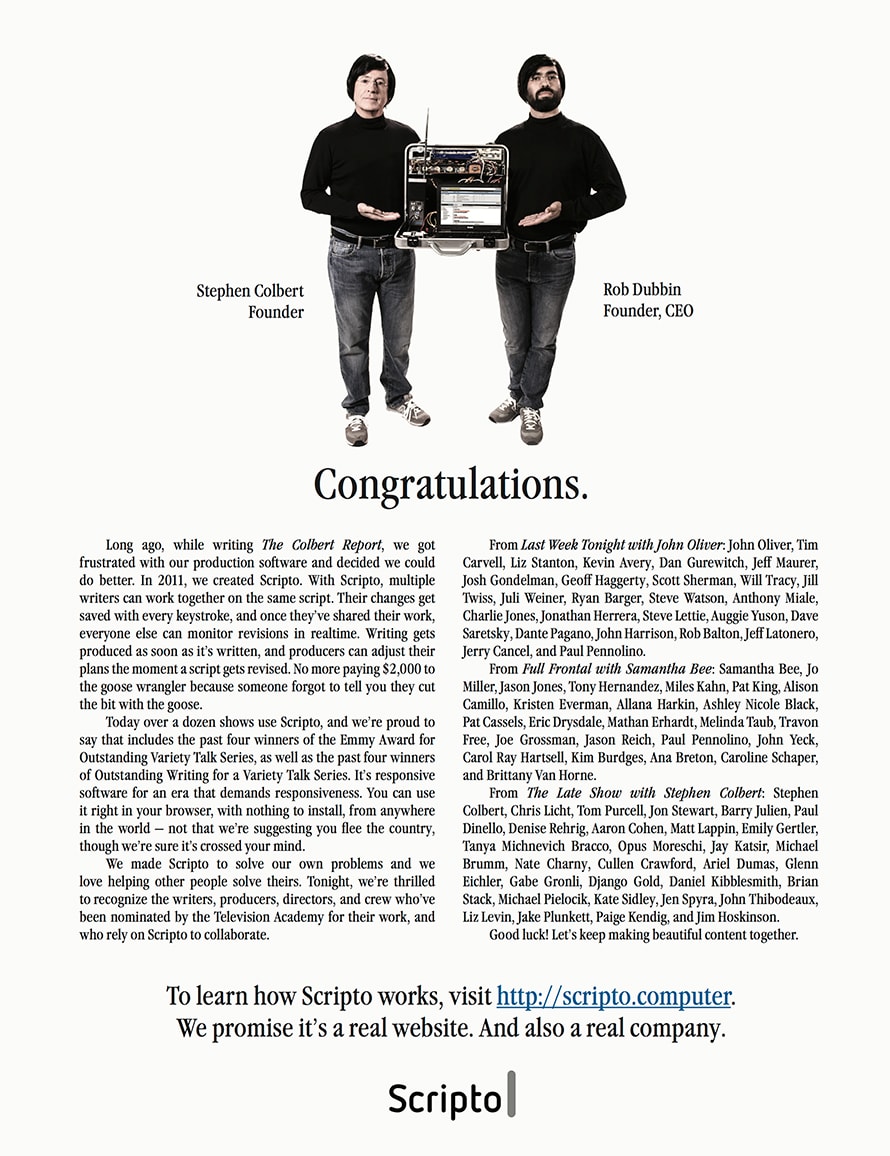 The duo decided to advertise in the Emmy program, and not a showbiz trade publication, because “the Emmy audience is full of people at the top of their game,” said Dubbin, who has attended several ceremonies as a Colbert Report writer.

“I was also aware of the fact that there’s some pretty significant downtime in that ceremony, and so the Emmy program is a great way to reach a concentrated audience of working TV professionals who understand the challenges of making entertainment. But also it’s an opportunity to make people laugh a little bit and stand out in that program,” he said. 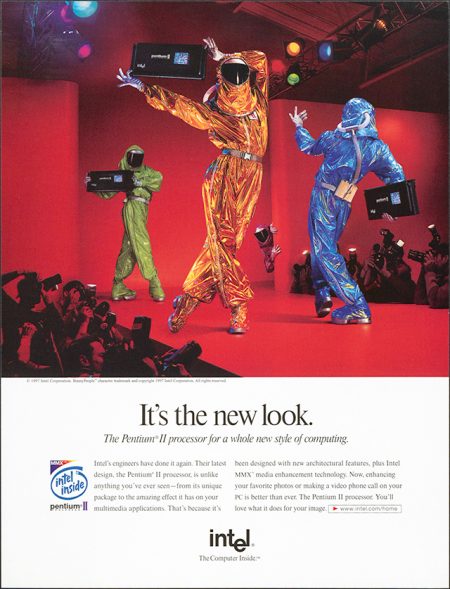 Dubbin and Colbert were “really happy” with the response to last year’s ad, he said. “What really appealed to us was the idea of establishing this tradition where we’re able to both congratulate our clients and let everybody else know what we’re up to as a company.”

Because of that captive audience, Scripto’s ads are much more text-heavy than a typical advertisement. Dubbin, who wrote the copy, wanted to explain the product, congratulate the nominees who use Scripto (including writers from The Daily Show With Trevor Noah, Full Frontal With Samantha Bee, Last Week Tonight With John Oliver and The Late Show With Stephen Colbert) and add a few jokes (“Congratulations and good luck tonight! Also, plus contact us if you know how to get tomato sauce out of a lab suit.”).

“We want something to reward people’s curiosity about what we’re up to, because we know that it’s not conventional for a couple of comedy writers to start a tech company,” he said. “But we’re also really inspired by those old ads from the past, that used to be more commonplace when there was a new technology or something that was exciting. They would take the time to explain it, in a couple long paragraphs of text. And I loved that style.”

It’s likely that Colbert and Dubbin will continue the tradition with an ad in 2019’s Emmy program, as well.

“What I like about this concept is how it opens up the future for us to advertise with other callbacks to vintage tech, and to expand that world outward as we continue to serve this community of professionals that work real hard and make cool stuff,” said Dubbin.