TV Viewership Was Down, But Total Audience For the Super Bowl Topped 118 Million

The lowest rated Super Bowl since 2009 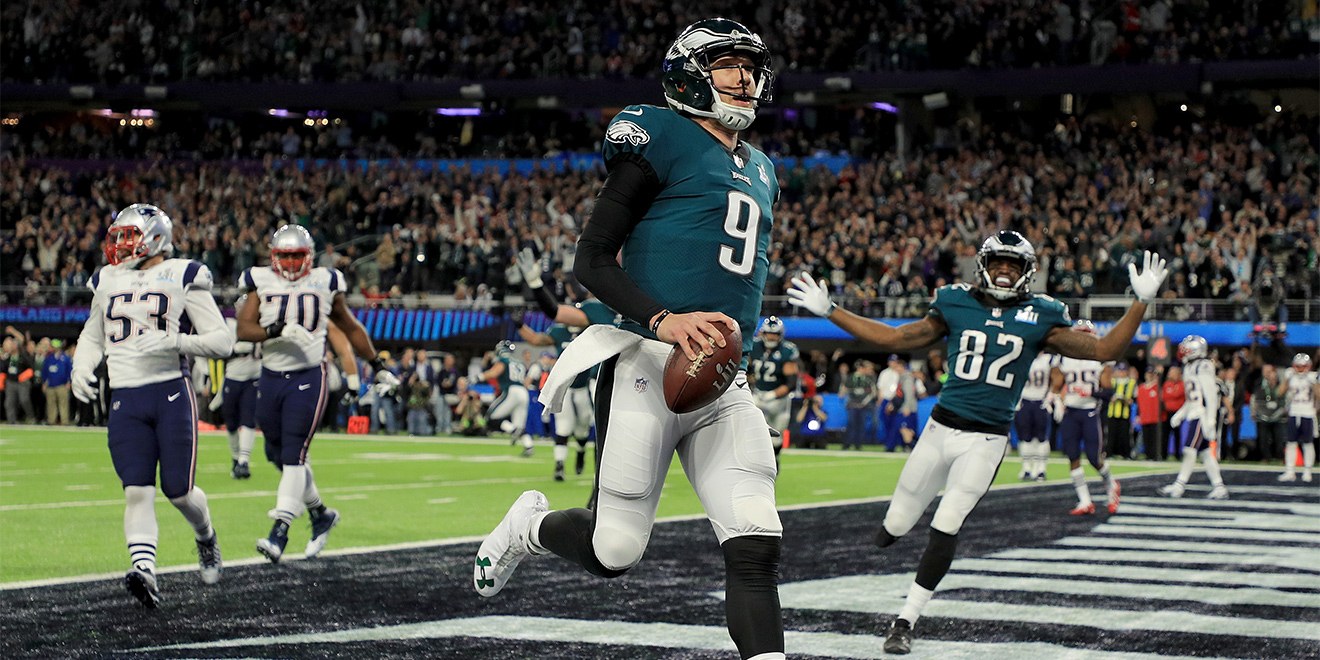 The Philadelphia Eagles’ thrilling 41-33 Super Bowl upset of the New England Patriots—which wasn’t sealed until the game’s final play—wasn’t enough to reverse this year’s NFL ratings declines. According to Nielsen’s fast national ratings, 103.4 million tuned in to NBC on Sunday night, making it the lowest-rated Big Game telecast since 2009.

The rating—a 7-percent decline from last year’s Super Bowl, which averaged 111.3 million viewers on Fox—means that NBC fell far short of its Super Bowl record set in 2015; that year, the game was watched by an average of 114.4 million total viewers. Fox’s 2014 Super Bowl telecast remains the No. 2 most-viewed Super Bowl with 112.2 million viewers.

In NBC’s Total Audience Delivery metric—which rolls up the total viewer numbers from a telecast’s linear, digital and out-of-home viewing—the game averaged 106 million viewers across all platforms, including NBCSports.com, the NBC Sports app, the NFL mobile app, the Yahoo Sports app, Universo and NFL.com. The TAD number doesn’t yet include the game’s out-of-home viewers, which won’t be available until Thursday; NBC estimates that number will add “several million” to its TAD metric.

UPDATE: Thursday night, NBC said the game had more than 12 million out-of-home viewers, which increased the TAD number to 118.2 million viewers across all platforms. Because this is the first Super Bowl in which out-of-home viewers were measured, there is no comparable TAD metric for previous Big Games.

Last year, the Patriots’ overtime win on Fox was watched by 111.3 million, making it the fifth highest-rated game of all time. This year’s game was the ninth most-watched Super Bowl of all time, and the No. 10 highest-rated program in U.S. history (the M.A.S.H. finale, in 1983, drew 106 million).

It was the lowest-rated Super Bowl since 2009’s Super Bowl XLIII, when 98.7 million turned in to watch the Pittsburgh Steelers beat the Arizona Cardinals.

NBC had hoped to break its own record from 2015, when 114.4 million watched Super Bowl XLIX. “We love having the record; we would love to break our own record,” Fred Gaudelli, executive producer of Super Bowl LII as well as NBC’s Thursday Night Football and Sunday Night Football, said before the game. “Am I expecting it? I’m not sure about that. But will I be disappointed? Yeah, I’ll be disappointed if we don’t break it.”

But with this season’s NFL ratings down 10 percent, Gaudelli had been bracing himself for the possibility that the Super Bowl audience would be smaller as well. “Logic would say probably, possibly, but I don’t know,” Gaudelli said. “It’s still the biggest event in America.”

NBC did set one Super Bowl record yesterday: With ads going for more than $5 million per 30-second spot, it raked in around $500 million in ad revenue yesterday ($350 million of which came from in-game advertising), which is more than any media company has ever collected in a single day. NBC Sports sold out of its in-game advertising inventory on Friday, just 48 hours ahead of Super Bowl.

Because Super Bowl ads aren’t guaranteed, NBC doesn’t have to worry about any potential makegoods out of its lower-than-hoped-for numbers.

Kantar Media estimated that NBC made $414 million in in-game ad revenue (which it said was slightly below last year’s $419 million, due to the game’s four overtime ads). There was a total of 49 minutes and 35 seconds of ad and promo time, the third largest in Super Bowl history; of that number, 40 minutes and 10 seconds of national ad time went to paying sponsors, with an additional nine minutes and 25 seconds dedicated to promos and PSAs from NBCUniversal and the NFL.