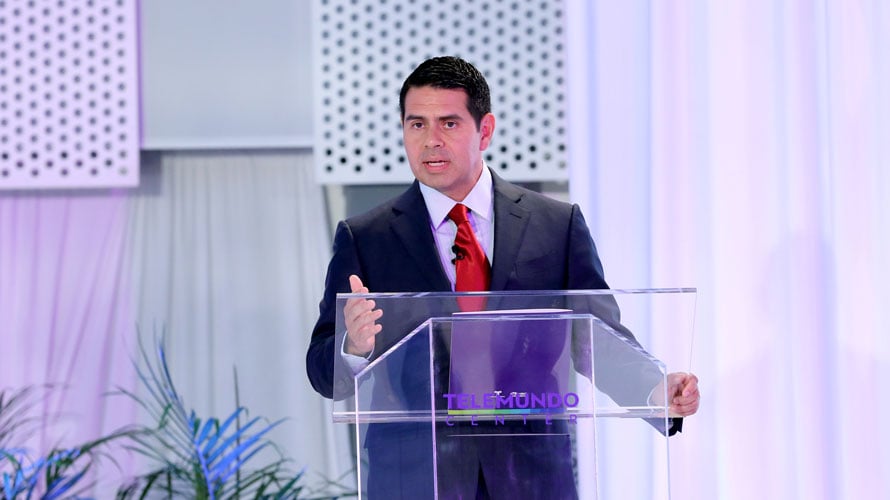 NBCUniversal Telemundo Enterprises chairman Cesar Conde is looking for a bigger slice of the upfront pie. - Credit by Getty Images

Hispanics yield $1.7 trillion of buying power, and represent nearly one of every five people living in the United States. They are young, bilingual, digitally fluent, and according to a PricewaterhouseCoopers study, they stream 10% more programs than the rest of the U.S.

In other words, advertisers should be devoting a significant amount of their spend on them, if they aren’t already.

This was, in essence, the case Telemundo executives made today during their pre-upfront press briefing, held this morning via livestream from Telemundo Center in Miami. The network had given Adweek a preview of its upfront pitch last week.

“At the median age of 29, versus non-U.S. Hispanics at 44, Hispanics are a digital-first consumer, over-indexing on smartphone use and time spent on social media,” NBCUniversal Telemundo Enterprises chairman Cesar Conde said.

“Our premium content has generated 250% more streams than a year ago,” added Peter Blacker, evp of revenue strategy and innovation, NBCUniversal Telemundo Enterprises.

That digital-first consumption apparently carries over to linear ratings. After years of playing second fiddle to Univision, Telemundo seemed to have a breakthrough in 2017, which carried over to 2018. Telemundo boasted it finished No. 1 on Spanish language TV among adults 18-49 in weekday prime time for the second consecutive year, and as the No. 1 broadcast network among adults 18-34 in weekday prime.

Back-to-back yearly wins in the key demo, much less any category, had never happened in the network’s history. It obviously remains to be seen whether Telemundo can repeat, or if Univision can regain its dominance across the board.

“The Spanish language media landscape has changed dramatically in the past five years, and at Telemundo we are proud to say we have closed the ratings share gap with Univision,” said NBCU svp of hispanic strategy and client experience, ad sales, Ana Ceppi. “It’s time for advertisers now to catch up with the market and invest 50% of their Spanish language budget with Telemundo.”

The network’s young, digital-first audience that Telemundo says is growing year to year will have the opportunity to consume a programming slate consisting of live sports, politics, and scripted and unscripted series on the platform of their choice.

The summer programming slate begins with a bang, with what the network is calling its “Summer of Soccer.”

Telemundo Deportes has Spanish language broadcast rights to the 2019 FIFA Women’s World Cup, which will be held in France, and the Brazil-based Copa América.

Telemundo Deportes president Ray Warren said it would behoove advertisers to get involved in these two tournaments based on what the network found in 2018. Not only was the 2018 FIFA World Cup the most digitally consumed World Cup ever, but Warren said that only 20% of the audience was actually “English-language dominant.” Taking a slight jab at Fox Sports, Warren said its coverage must have been “más mejor en Español.”

Telemundo said 80% of its World Cup audience was bilingual and half of the total audience hadn’t watched Telemundo in the past month or more until the event.

There will be weeks where the Women’s World Cup and Copa América will intersect. Will that put a dent in Telemundo ratings? Warren said not really, in part due to the time difference. World Cup coverage will air in the morning and Copa América coverage in the evening from June 7 through July 7, “and hopefully they’ll stay on our digital platforms all day long.”

In the midst of that soccer action, Telemundo will co-host the first Democratic presidential primary debate with NBC and MSNBC on back-to-back evenings in June. The debates will be held in Telemundo’s Miami stomping grounds.

Season 7 of El Señor de los Cielos, Telemundo’s most successful series of all time, will return, as will La Reina del Sur, which ranked as the No. 1 scripted show in America regardless of language at 10 p.m. among adults 18-49.

There’s a new limited scripted series named No Te Puedes Esconder, which consists of 10 parts and is coming this fall.

Plus, Operación Pacífico, a new series starring Majida Issa and Mark Tacher inspired by real-life events that tells the story of Amalia Ortega, a prominent and brilliant federal agent who leads an investigative unit for the national police. Amalia has the mission and personal goal of capturing El Guapo, one of the last drug lords in the northern border of Mexico.

On the unscripted side, there’s a new season of La Voz, the Spanish language version of NBC’s The Voice, and Exatlon, the family-friendly sports and reality survival competition that returns to Telemundo for its third season. Exatlon was the No. 1 show Monday through Friday and Sunday among adults 18-34 at 8 p.m.

Telemundo will also debut the Spanish-language version of the successful NBC hit gameshow, The Wall.

Conde believes his network, and Hispanic America as a whole, is on the rise: “Bottom line: The future of our country is directly linked to the success of Hispanics. And Telemundo has quickly risen to become the voice and choice of Latinos here in the United States.”