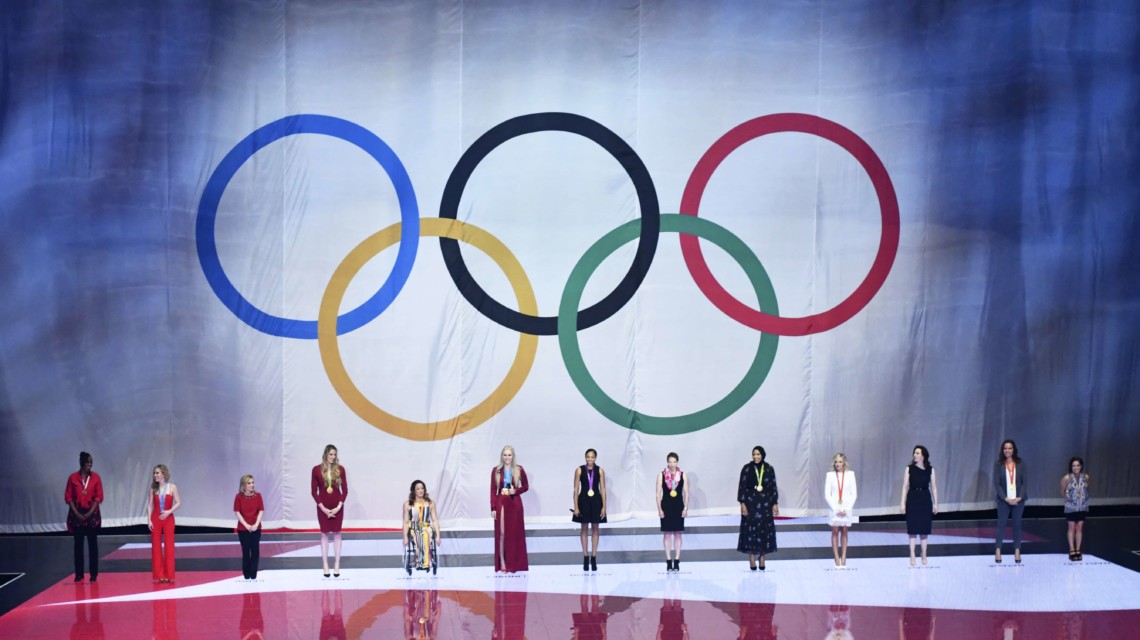 In a goosebumps-inducing moment, NBCUniversal assembled 13 medal-winning female Olympians at its event. - Credit by Charles Sykes/NBCUniversal

The most disruptive upfronts week in a decade is finally over.

Before the upfront negotiations begin, let’s take one last look back at the week’s 10 most memorable moments, from the highs (standing ovations) to the lows (Terry Bradshaw’s self-described “offensive comments”) compiled by me, as well as the rest of the Adweek TV team. If you missed any of Adweek’s comprehensive upfront coverage, you can find it here.

Next year’s Summer Olympics in Tokyo “will not only be the biggest event of the year, but also the biggest Games ever,” Mike Tirico, NBC’s primetime Olympic host, told the Radio City Music Hall audience. So the company created an appropriate epic moment to celebrate: assembling 13 medal-winning female Olympians—including Jackie Joyner-Kersee, Kerri Strug, Lindsey Vonn and Mary Lou Retton—which resulted in what ended up being one of the week’s only standing ovations. To cap off the goosebumps-inducing moment, NBCU brought a full orchestra onstage to play its famous Olympics fanfare.

Fox’s first upfront since the company was spun off had some fun moments (a Masked Singer performance of “Luck Be a Lady” from legendary New York Jets quarterback Joe Namath; Fox Sports Erin Andrews cornering Fox Entertainment CEO Collier backstage for a mock halftime interview), but those were overshadowed by an even more embarrassing than usual—and this year, downright offensive—appearance from the Fox NFL Sunday team. Terry Bradshaw complained that “Alan Thicke” and “that little short guy from Japan” voted him off The Masked Singer earlier this year—an appalling (and also inaccurate) reference to Masked Singer judges Robin Thicke (the late Alan’s son) and Detroit-born Korean-American Ken Jeong. Bradshaw apologized later that night Monday for his “offensive comments,” but Fox clearly needs to keep him away from the upfront stage.

Telemundo, which was given ample time at the NBCUniversal upfront to tout its message of “Bigger, Bolder, Better,” carried that theme to The Hammerstein Ballroom Monday night, where the network hosted its annual upfront celebration highlighted by a rousing performance from pop music superstar Pitbull. Before Pitbull’s set, media buyers and assorted Telemundo clients watched a colorful acrobatics performance set to a backdrop of new Telemundo programming, and network chairman Cesar Conde told buyers why his network is the right bet for their ad buy. —A.J. Katz

Xandr CEO Brian Lesser was honest from the start about the amount of pizzazz to expect Tuesday morning at the Bryant Park Grill. In short, the 8 a.m. champagne bar in the other room was about the extent of it: “It’s very fashionable to roll your eyes at upfront week, like [it is with] Cannes: ‘Ugh, I’ve got to spend a week in New York and hang out with celebrities, go to great concerts and have great meals.’ Well, my advice is: Enjoy that, but you’re not going to get any of that this morning.” True to his word, the hour that followed featured a dry discussion of the company’s new ad exchange, addressable TV updates and consumer research. —Patrick Kulp

Yes, the company’s first combined upfront was far too long (two hours, 19 minutes), and yes, Jimmy Kimmel killed as usual. But what really stood out was the appearance of Modern Family’s cast ahead of that show’s final season next year. On stage, co-creator Steve Levitan recalled that “10 years and four networks presidents ago” at ABC’s upfront, the network aired the Modern Family pilot in its entirety. “We were so nervous,” given that the last pilot screened in full at an upfront (Joey, the Friends spinoff) “bombed and never recovered,” said Levitan, but “much to our relief, this room laughed in all the right places.” He added, “in 22 minutes, all of our lives changed forever … we all consider it one of the best days of our lives.” It was a good reminder of how seismic an upfront presentation can be potentially be.

The self-described “America’s Hispanic Superbrand” capped off its multi-day upfront with an epic concert for ad buyers on Tuesday night at Webster Hall. Latin music legend Marc Anthony was the headliner for this year’s Univision upfront party, performing in front of a jam-packed, raucous ballroom where every attendee seemed to know each word of the artist’s greatest hits. Big screens were set up high and to the sides of the stage, showing off Univision’s new programming slate, but there were no public remarks made by CEO Vince Sadusky or any Univision executives prior to the performance. Everything that needed to be said had already been discussed earlier in the day. —A.J.K.

While Screenvision spent a large chunk of its upfront zeroing in on the success of Avengers: Endgame, the company ended its event with a memorable performance from Idina Menzel, the who’s reprising her role as Elsa in Frozen II (coming out in November). Menzel ended her performance by singing—what else?—“Let It Go,” from the original Frozen. Earlier in the event, CEO John Partilla conducted fireside chats with Hilary Swank and Vince Vaughn, discussing why movies matter and how they bring people together. —Ann-Marie Alcántara

If you’re trying to convince advertisers to spend money with your company, it’s not the best strategy to keep reminding them of their involvement in a horrible accident that resulted in a death, lawsuit and multimillion settlement. But Tracy Morgan, star of TBS’ The Last O.G., immediately began riffing on his serious car accident in 2014, when his limo van was struck by a Walmart truck driver, and the hefty settlement he received as a result. “Walmart think they done paying me, too. We’ll see,” he told the theater filled with advertisers, which presumably included Walmart execs or buyers representing the brand.

Would he or wouldn’t he? One of the biggest questions going into CBS’ upfront was whether Stephen Colbert would mention the elephant in Carnegie Hall: the upfront absence of former CEO Les Moonves for the first time in two decades. And Colbert did, explaining he had been given a stack of research about how well CBS performed this year, but didn’t have time to get through it all. “So, I just read Bill Barr’s four-page summary. Turns out, Les Moonves—totally exonerated.” Just four years ago—shortly before the Late Show’s ratings finally took off—Colbert’s set had been the weakest segment of CBS’ upfront event. Now, he’s become one of the company’s upfront MVPs.

As always, the network was well aware of the fact that after a grueling upfronts week, its presentation was all that stood between buyers and the finish line. “I’m sure some of you are sitting on the edge of your seats like it’s the last day of school,” said ad sales chief Rob Tuck. So the network gave buyers a wonderful upfronts week parting gift: a briskly-paced final event that clocked in at just 47 minutes—or just one-third of Disney’s running time.