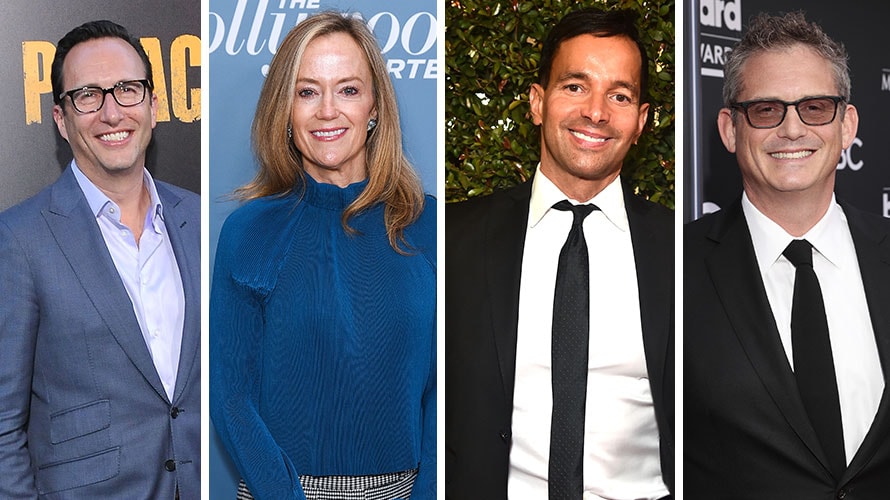 Fox's Charlie Collier, ABC's Karey Burke and NBC's George Cheeks and Paul Telegdy have each been on the job for less than 5 months. Getty Images

The Television Critics Association’s winter press tour is starting a few weeks later than usual this year—in order to distance itself from other January TV events like CES and the Golden Globes—but the semiannual event finally kicks off today at the Langham Huntington in Pasadena, Calif.

More than 200 television journalists and critics are gathering for the TCA’s semiannual event (there’s also summer press tour each July/August), featuring 16 days of panels, set visits and receptions that will spotlight new and returning shows from dozens of broadcast, cable and streaming outlets. (As usual, Adweek will be filing stories extensively throughout.)

While most networks use the summer press tour to set their agendas for the coming TV season, the winter press tour is more about highlighting the TV industry’s biggest issues for that year.

These are the five most pressing questions about the future of TV that the winter press tour will tackle over the next two and a half weeks:

What do the new broadcast presidents bring to the table?

In the five short months since the summer press tour ended, three of the five broadcast networks already have new presidents. In September, George Cheeks and Paul Telegdy were named co-chairman of NBC Entertainment, replacing Robert Greenblatt. A month later, Fox tapped AMC’s Charlie Collier as its new CEO of Entertainment (former Fox chief Dana Walden will move to Disney as chairman of Disney Television Studios when the Disney-Fox deal closes, and her counterpart Gary Newman chose not to stay at Fox). Channing Dungey then left ABC in November, ending up at Netflix as vp of original content; her ABC Entertainment president role has been filled by Freeform’s Karey Burke.

All of the new chiefs have kept a relatively low profile since taking on their new roles, which means the press tour will be their first opportunity to share their vision for their respective networks. (Though perhaps not at NBC, which is starting things off today: Cheeks and Telegdy aren’t scheduled to hold an executive session.)

How will the pending Disney-Fox merger shake up ABC, Fox, FX, National Geographic, Freeform and Hulu?

The Disney-Fox merger, announced more than a year ago, still hasn’t closed, though both Disney and new Fox (which will include the Fox assets spun off prior to the merger) have set their respective executive teams for when that does occur.

But until all the i’s are dotted and t’s are crossed, all of the Disney and Fox networks are essentially in limbo, unable to fully execute their plans. (In addition to ABC, Fox, FX, National Geographic and Freeform, this also includes Hulu, where Disney will have a majority stake.) But the remaining execs at those networks should be able to shed a bit more light on how they expect to change, or not, under their new owners and management structures.

How will HBO respond to Netflix’s Emmy challenge?

Even before AT&T increases HBO’s programming budget, this is expected to be a banner year for the premium cable network. HBO isn’t doing a panel for Game of Thrones, which returns April 14 for its final season, but the network will be presenting two of press tour’s most highly-anticipated panels: for the return of Veep for its seventh and final season, and for the second season of Big Little Lies (in which Meryl Streep will join the returning Reese Witherspoon, Nicole Kidman and Laura Dern).

Following a year in which Netflix broke HBO’s 17-year Emmy streak as the most-nominated network—both outlets ended up tying in overall Emmy wins—these two critically-acclaimed shows will likely give HBO its best shot at reclaiming the awards throne.

How will OTT evolve this year?

Netflix, which returned to the summer press tour after a lengthy hiatus, is sitting the winter gathering out, but streaming services should still dominate much of the tour. Amazon and Hulu will both be back (Amazon is keeping its press tour lineup under wraps, but Hulu’s day will feature Catch-22, which is George Clooney’s first major TV project since ER).

Kevin Reilly, who is overseeing content for AT&T’s upcoming streaming service, is expected to discuss some OTT plans during his executive session. And several smaller streaming services that you probably didn’t even know existed, including True Royalty TV and CuriosityStream, will also try to get some press tour attention before the arrival later this year of Disney+, along with the new services from Apple and AT&T.

Which new show will everyone be talking about this year?

It’s become increasingly difficult for new shows to break through in the Peak TV era—495 scripted series aired last year—and strong early buzz at press tour can often help a promising freshman series build momentum in the months leading up to its premiere. Last year, Killing Eve, Pose and Homecoming established themselves as forces to be reckoned with during their first glimpses at press tour, just as The Handmaid’s Tale had done in 2017.