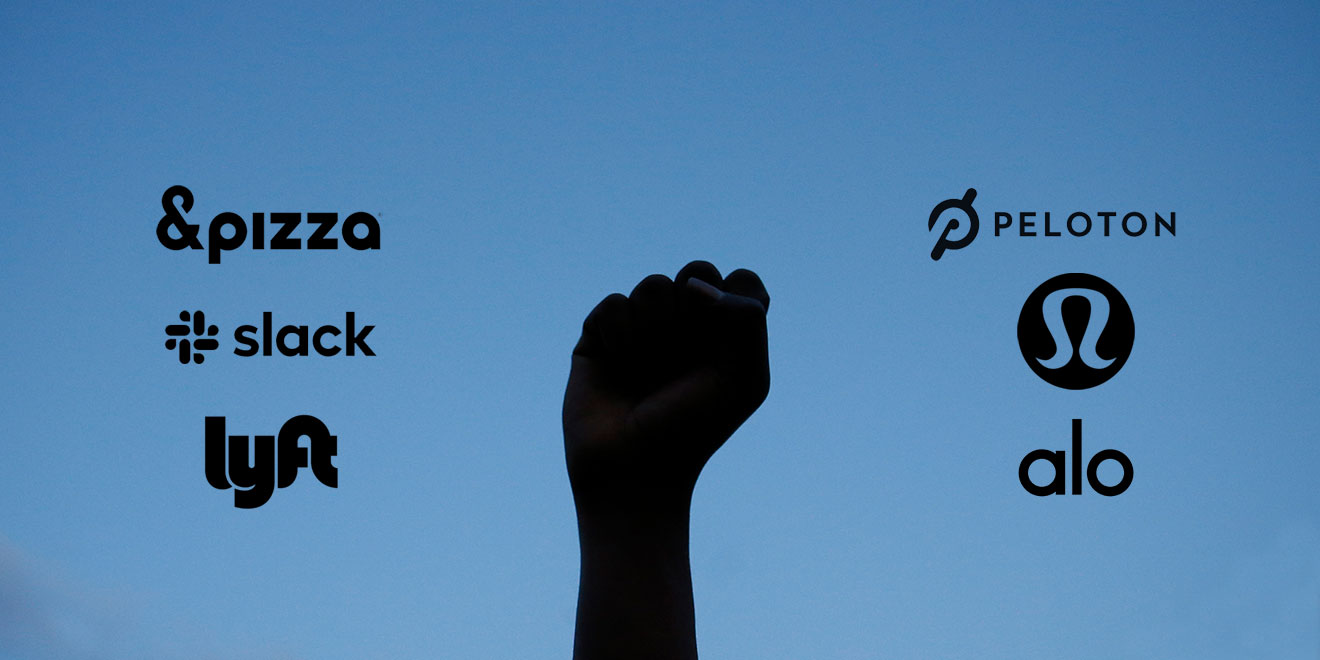 Since the outbreak of protests over George Floyd's death on May 25th, brands have been pledging funds to organizations committed to fighting racial injustice. - Credit by Getty Images

Brand responses to #BlackLivesMatter have drastically changed since the movement’s formal inception in 2014 when 18-year-old Michael Brown was shot by Ferguson police officer Darren Wilson. In the six years since Brown’s death, more than 1,252 black people have been killed by law enforcement, according to The Washington Post’s database tracking police shootings. It took the recent publicized police killings of Ahmaud Arbery, George Floyd, Breonna Taylor and Tony McDade to get brands to speak out against racial injustice.

Consumers are apparently holding brands more accountable for their actions, which in turn, is causing brands which tend to deviate from politicization to break their silence. But how much of it is genuine, and how much of it is saving face? It’s difficult to tell what is what, but advocates told Adweek that protesters want more than words.

What’s one surefire way to enact meaningful change in the world? Smash your piggy bank. Several brands have been opening up their purses and shelling out thousands for legal defense and bailout funds, among others. Beauty company Glossier, for example, is donating $500,000 to six organizations and $500,000 in the form of grants to black-owned beauty businesses.

It should be noted that many of the brands that have made significant monetary donations or have offered solutions through purposeful social initiatives are taking steps to correct problematic pasts.

Facebook’s employees are still unsuccessfully mounting internal and public pressure to censor President Trump’s provocative posts regarding the protests in response to George Floyd’s death that, according to Twitter, glorified violence. The platform’s inaction has caused potential partners, like Talkspace, to suspend further discussions. According to Talkspace CEO and co-founder Oren Frank, Facebook “incites violence, racism and lies.”

In December, Peloton released a marketing fail that was accused of being dystopic and sexist, among other unflattering descriptors. Target may be providing support for its 200 displaced Minneapolis employees and is promising to invest more in the city’s black and brown communities, but that doesn’t erase its history of racism at home base. Uber spent up to $500 million on an apology campaign in 2018 to scrub its tarnished reputation (grievances against the carpool company included allegations of racial discrimination by the company’s former head of HR).

Though imperfect, at least these brands are putting money where their mouths are instead of merely performing authenticity. Here are the brands offering up more than just words to support the Black Lives Matter movement.

This list is ongoing. Spotted a brand giving back? Send an email to monica.zorrilla@adweek.com.

We realize in our pursuit of saying the right thing we have waited too long to say something. Saying something, even if not perfect, is the right thing to do. There is no room for racial and social injustice in this world and we know how much this matters. We stand in solidarity with the families of George Floyd, Breonna Taylor and Ahmaud Arbery. Alo will donate proceeds from this weekend’s sales to @blackvisionscollective and @campaignzero. We see you. We hear you. We stand with you. #BlackLivesMatter

The unisex yogi clothier is donating proceeds from this past weekend’s sales to Black Visions Collective and Campaign Zero. Many followers pointed out on Instagram that although they were pleased with Alo’s decision, they would like to see the brand champion yogis of all races and ethnicities, sexes, genders, bodies and abilities. A look through Alo’s feed shows how white and monolithic its social media presence has been thus far.

In memory of George Floyd & in UNITY always.

From this day forward, @andpizza will be giving its employees paid time off for activism. pic.twitter.com/j6Capnl37t

Fast-casual restaurant chain &pizza will be giving its employees paid time off for activism “for those unseen but his country to be seen, for those unheard by this government to be heard,” their statement said. In April, &pizza donated 100,000 pies for those at the epicenter of the Covid-19 pandemic.

We see you. We hear you. We stand with you. Together we unite against racial injustice. The Antiracist Research & Policy Center is doing critical work to understand, explain and solve problems of racial inequity and injustice. Bliss is making a $40,000 donation to this organization. To learn more about their work or how to get involved, please visit the link in our profile.

Cruelty-free skincare brand Bliss has made a $40,000 donation to The Antiracist Research & Policy Center.

The House of Mouse is giving $5 million to support social justice initiatives, starting with a $2 million donation to the NAACP and following with more donations to organizations like the United Negro College Fund.

Announced in a blog post on the e-commerce company’s site, Etsy will be donating $500,000 to the Equal Justice Initiative and $500,000 to Borealis Philanthropy’s Black-Led Movement Fund, as well as matching employee donations.

#shareblackstories We hear you, we see you, and we are with you. We stand against racism. We stand with our Black community - and all of those working toward justice in honor of George Floyd, Breonna Taylor, Ahmaud Arbery and far too many others whose names will not be forgotten. Time and time again, we have seen that the Instagram community has the power to bring about meaningful change. The more we #ShareBlackStories, the more we raise voices that make a lasting impact. To continue that impact, @facebook is pledging $10 million to efforts committed to ending racial injustice. #BlackLivesMatter

Last Friday we announced that we were working on a plan to support the #blacklivesmatter movement. We have spent the past four days since then working with black community leaders, influencers and ambassadors to develop a plan. Today, Fashion Nova Cares announces our dedication to ongoing action.  We are pledging to spend $1 million dollars throughout 2020 in donations for community resources and activism, awareness campaigns and other initiatives to help in the fight for racial equality and opportunity. To start, we will donate to organizations fighting for change: @BLKLivesMatter, @NAACP Legal and Education Fund and @YourRightsCamp. We will continue to update you as we make progress in supporting additional organizations and initiatives on our @fashionnovacares page. Fashion Nova Cares was launched to give back and make our world better. As always, we appreciate hearing directly from the community and about how together we can make a difference. For more information visit the link in bio. Our voices will rise as we proceed with action. #FashionNovaCares #BlackLivesMatter

Fashion Nova Cares, the online fast fashion retailer’s philanthropic initiative launched alongside rapper Cardi B in April 2020 to give away $1 million for Covid-19 relief, has now pledged another $1 million to Black Lives Matter, Know Your Rights Camp and the NAACP Legal Defense and Education Fund.

Leggings empire Lululemon is making a $100,000 donation to the Minnesota Freedom Fund. One current employee, @wanderbus, commented on the Instagram announcement with gratitude. “For almost 9 years I have worked for this company. Every single year is better than the last. Without fail,” she said. “As a black woman, I have gotten to experience the absolute care and intention that Lululemon puts into moving forward and being better. How Lululemon pours into its employees. But this … I have no words for pride I feel at this moment.”

The acts of injustice against Black Americans — George Floyd, Ahmaud Arbery, Breonna Taylor, Christian Cooper, and countless others — must be a call to action. I feel a deep responsibility to listen, speak up and be part of the solution. 1/3

Equality. Justice. Action. Now. For years, we have used our voice to shine a light on inequality, highlight bias, and spark dialogue that leads to understanding and action. But that’s not enough. More is needed. Now. Together with our brands, we are establishing the Take on Race Fund with an initial contribution of $5 million to accelerate and expand this work alongside organizations that fight for justice, accelerate economic opportunity, enable greater access to education and health care and make our communities more equitable. #TakeOnRace #linkinbio

Together with its 65 individual consumer goods brands, P&G will be establishing the “Take on Race Fund” with an initial contribution of $5 million. Per the company’s announcement, the fund has been created “to accelerate and expand this work alongside organizations that fight for justice, accelerate economic opportunity, enable greater access to education and health care and make our communities more equitable.”

The Black community is hurting. Our Black Members, instructors, music partners and employees are hurting. #BlackLivesMatter, and it’s time to take action. To start, we are making a $500,000 donation to @naacp_ldf. We have more work to do. Will you join us? Get involved: 1. Join the #BlackLivesMatter tag and ride, run or flow with fellow Members in support and solidarity 2. Speak up and speak out against racism 3. Learn ways to practice anti-racism 4. Donate to NAACP LDF

The stationary bike and group fitness brand announced it would make a $500,000 donation to the NAACP Legal Defense and Educational Fund on Instagram. They also encouraged their followers to speak up and speak out against racism.

We also set aside $300,000 to match donations to any of these orgs. Reply w/ receipts or email matching@rubiobutterfield.org

Slack and Away’s co-founders Stewart Butterfield and Jennifer Rubio—who are engaged to each other—will be giving $700,000 to 10 social justice organizations and are setting aside $300,000 to match donations to any of those organizations.

Following an alleged technical glitch that made posts with the hashtags #BlackLivesMatter and #GeorgeFloyd appear as if they had zero views, TikTok donated $3 million from its Community Relief Fund to nonprofits that aid the Black community and another $1 million toward “fighting racial injustice and inequality.”

.@Uber stands in solidarity with the Black community and with peaceful protests against the injustice and racism that have plagued our nation for too long. My hope is that if each of us recommits to doing all we can to counter bigotry wherever we see it, change will follow. (1/2)

Uber is donating $1 million to the Equal Justice Initiative and The Center for Policing Equity “to support their important work in making criminal justice in America more just for all,” CEO Dara Khosrowshahi said on Twitter.

XO is profoundly hurt and angered by the murder of George Floyd by police. We are deeply committed to ending police violence and white supremacy and believe that it is way past time for American businesses to take a stand. We are a small startup, but we have donated $1,000 to Colin Kaepernick’s Know Your Rights Camp and we are asking everyone to fight for real change in every way they can. #blacklivesmatter #justiceforgeorgefloyd