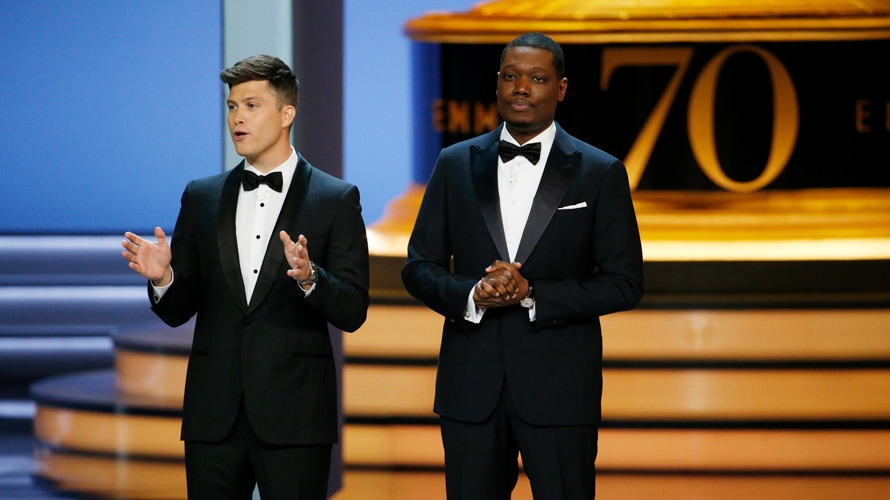 Colin Jost and Michael Che emceed 2018's Emmy ceremony, but Fox has opted not to have a host this year. - Credit by Paul Drinkwater/NBC

First the Oscars ditched its customary emcee this year, and now the Emmys is following suit.

As this year’s Emmy network, “It’s our job to assess how to elevate the program,” said Collier. And in a “unique year” when so many of “America’s favorite shows” went off the air, like Game of Thrones, The Big Bang Theory and Veep, the decision was made to devote the 15-20 minutes that would normally be taken up the host’s monologue and other comedy bits to celebrating those departing series.

“We will go hostless this year, and I think that will give us more time to honor these shows,” said Collier.

That said, the network, Television Academy and Emmy producers did consider having a host, as usual. “We had a lot of names on the board, but the conclusion was reached that this year, it would be a really strategic use of the Emmys to spend the time there,” he said.

This was the Fox Entertainment CEO’s first press tour appearance since Fox Corp.—which includes Fox Entertainment, Fox Sports and Fox News—was spun off ahead of the Disney-Fox deal in March.

“Our independence allows us to question nearly every assumption about what it means to be an entertainment company,” said Collier. “We’re building something different and something new.”

Even though Fox now longer has a stake in Hulu—that was one of the many 21st Century Fox assets Disney acquired in March—the company has no plans to abandon its presence on the streaming platform.

“Our Hulu relationship is thriving,” said Collier, who said Fox is also focused on its own free streaming platform, Fox Now.

This season, Fox will air two seasons of The Masked Singer, which was last year’s No. 1 freshman series (Season 2 will air this fall and Season 3 will debut after the Super Bowl in February), but Collier isn’t worried about potential audience fatigue. By season’s end, he said, around 30 hours of The Masked Singer will have aired, while The Voice and Bachelor franchises will each broadcast “at least 75 hours” in the same timeframe.

“It was nuts. It was a crazy bet,” said Collier of The Masked Singer. Now, it’s “America’s favorite guessing game.”

And going forward, “You’ll see us keep making bold bets.” One is upcoming competition series Lego Masters, which Collier said “has the potential to really rally families around their televisions just like The Masked Singer does.”

This holiday season, Fox is “going to do the holidays, Fox-style,” with an “anti-holidays” approach to December programming. That will include A Moody Christmas, a six-episode comedy series about a Chicago family that is set during the holiday season.

“We’re going to show you what Christmas looks like in a very different way,” said Collier.

“It is a remarkable feat to tell original stories all year long, every week in primetime,” said Collier, who isn’t worried about the network’s five-year commitment to air the show weekly. “We’re thrilled about it. We think it flows in our schedule beautifully.”

Prior to Collier’s executive session, Fox Entertainment said it has tapped former Sony Pictures Television ad sales chief Amy Carney as its new COO. She will report to Collier and oversee research, strategy and operations.