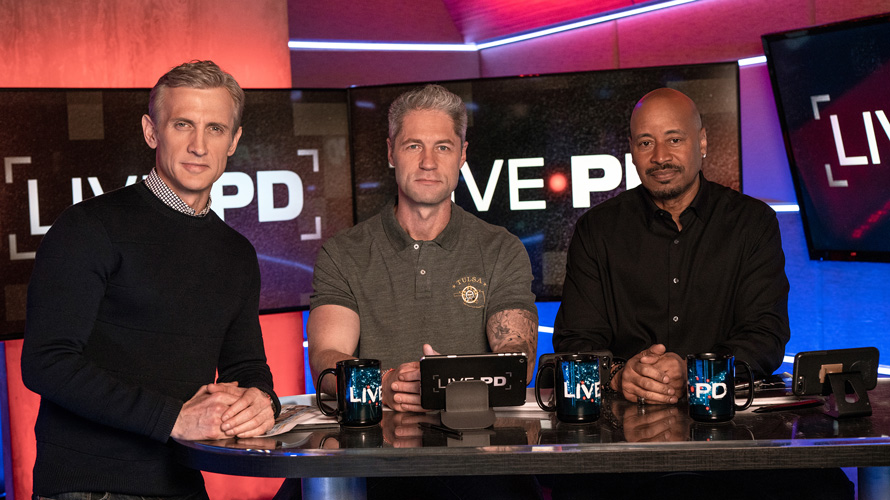 Live PD, one of cable's biggest hits, had been off the air since last week, and was canceled Wednesday night by A&E. - Credit by A&E

Television has become the latest industry to reexamine itself in light of the national protests against police brutality and racial injustice following the May 25 death of George Floyd, an unarmed Black man killed in Minneapolis police custody.

With the protests continuing and the cries for social justice intensifying, several outlets are pulling shows and movies that no longer seem appropriate. Tuesday night, Paramount Network canceled the long-running reality series Cops, while A&E has benched its own popular police docuseries, Live PD. And HBO Max has pulled the classic film Gone With the Wind, with plans to reinstate it down the road “with a discussion of its historical context,” the streaming service said in a statement.

Update: Wednesday night, A&E canceled Live PD, and released the following statement: “This is a critical time in our nation’s history and we have made the decision to cease production on Live PD. Going forward, we will determine if there is a clear pathway to tell the stories of both the community and the police officers whose role it is to serve them. And with that, we will be meeting with community and civil rights leaders as well as police departments.”

The protests have prompted action by several major industries. Among them: Bon Appétit editor in chief Adam Rapoport stepped down Monday after allegations of discrimination at the outlet and a photo of him in brownface surfaced. And more than 600 Black advertising professionals—representing Black talent from nearly every major agency in the country—penned an open letter Tuesday demanding meaningful action and outlining the steps agencies can take to make the advertising industry more equitable.

The cancellation of Cops came as the series had been set to return for Season 33 this past Monday. After delaying the premiere a week in light of last week’s protests, a Paramount Network spokesperson said Tuesday night in a statement that the series has been shelved for good: “Cops is not on the Paramount Network and we don’t have any current or future plans for it to return.”

Cops has been a TV staple since it debuted on Fox in 1989. It aired for 25 seasons, and later ran for six more seasons on Spike TV, which was rebranded as Paramount Network in 2018.

But now the show is gone for good: Paramount Network has already scrubbed all mention of Cops from its website. However, the Cops channel on ViacomCBS sister outlet Pluto TV, the free, ad-supported streaming service, remains active for now, according to a Pluto TV spokesperson.

Paramount Network joined ViacomCBS’ other cable networks in going dark for eight minutes and 46 seconds early last week, which was the length of time that Minneapolis police officer Derek Chauvin had his knee on Floyd’s neck.

Meanwhile, another reality series focusing on police officers in the field, A&E’s Live PD, was also pulled from the schedule last weekend—its 300th episode was supposed to air Saturday, but now the series has been canceled.

Tuesday night, the day before it decided to pull the plug, the network told Adweek it was unlikely the series will return this week, but no official decision had been made yet.

However, Live PD host Dan Abrams tweeted Tuesday night that the show will indeed be returning, noting that “All of us associated with the show are as committed to it as ever. We are still discussing some specifics but I want to assure the #LivePDNation that we are not abandoning you.”

Live PD had been one of cable’s biggest hits, spawning five spinoffs and at one point propelling A&E to nine consecutive quarters of network ratings growth in its key adults 25-54 demo. As Adweek wrote last October, the show, which is hosted by Dan Abrams and follows police officers around the country live for three hours on Fridays and Saturdays, has made A&E the No. 1 cable network during those days in the same demo (in live-plus-3), lifting the network 20 spots from its prior ranking before the series debuted in 2016.

Last month, ahead of its upfront talks, A+E Networks renewed Live PD for an additional 160 episodes. Paul Buccieri, president of A+E Networks Group, told Adweek at the time that Live PD had adapted to the pandemic “because it’s live, because we can be very nimble with the show.” Recent episodes have featured guests such as Surgeon General Jerome Adams, who spoke about the Covid-19 crisis.

The protests are causing some outlets to reevaluate their movies as well. On Tuesday, HBO Max removed the 1939 film Gone With the Wind—set on a Georgia plantation during and after the Civil War—from its service. That came one day after director-screenwriter John Ridley, who won an Oscar for writing the drama 12 Years a Slave, had suggested such a move in a Los Angeles Times column, writing, “it is a film that, when it is not ignoring the horrors of slavery, pauses only to perpetuate some of the most painful stereotypes of people of color.”

An HBO Max spokesperson said in a statement that “Gone With the Wind is a product of its time and depicts some of the ethnic and racial prejudices that have, unfortunately, been commonplace in American society. These racist depictions were wrong then and are wrong today, and we felt that to keep this title up without an explanation and a denouncement of those depictions would be irresponsible.”

Gone With the Wind will return to HBO Max “with a discussion of its historical context and a denouncement of those very depictions, but will be presented as it was originally created, because to do otherwise would be the same as claiming these prejudices never existed.”

TV’s social justice overhaul could have an even broader impact. Some critics have wondered if scripted police shows, which usually portray cops as heroes and Black people as criminals, should be canceled—or at least significantly overhauled—in light of the demands for change.

So far, there have been no such plans. Aside from NFL games, those police procedurals are among TV’s most popular programming. The three most-watched broadcast dramas last season were all CBS police procedurals: NCIS (averaging 15.3 million per episode), FBI (12.6 million) and Blue Bloods (12 million).

Still, at least one procedural creator thinks change is necessary.

“When I hear Hollywood colleagues playfully pondering whether or not we’re doing enough to address the image of the hero cop that has been entrenched as a procedural staple, the answer is clear: hell fucking no. There’s a ton of work we still have to do. The question is, how sincere will we be about putting in that work?” Aaron Rahsaan Thomas, who co-created S.W.A.T. for CBS, wrote in a column for Vanity Fair.

He continued, “We, as creators in Hollywood, have to be willing to expand the point of view from which these stories are told. Instead of focusing simply on what makes our jobs easier and more convenient, real change requires hard and sometimes uncomfortable work, conversations and consideration. Failure to do this can have real-life consequences. Ultimately, efforts to improve can and will lead to better TV shows, more nuanced cop procedurals, and, who knows, maybe even impact real-world interactions between police and community.”