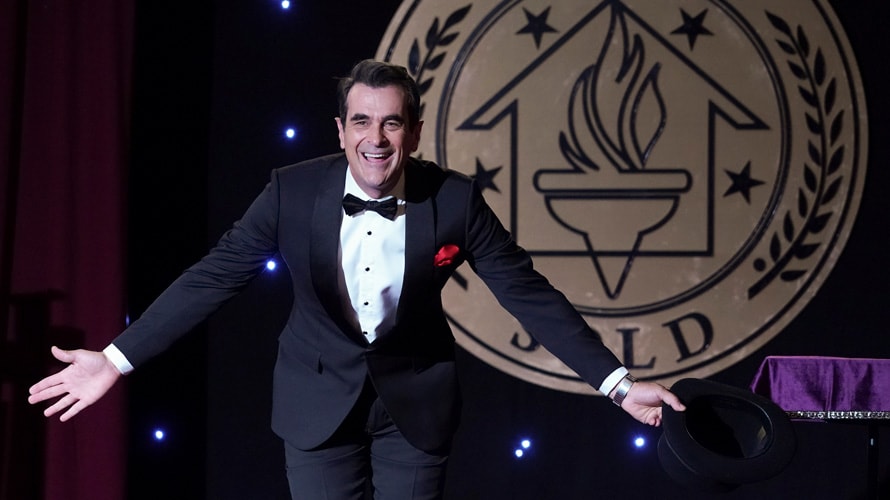 Ty Burrell has won two Emmys for playing Phil Dunphy on Modern Family, which signs off next spring after 11 seasons. - Credit by ABC/Richard Cartwright

On the heels of The Big Bang Theory’s farewell last season, another hit broadcast sitcom is preparing to end its decade-plus run. Next spring, Modern Family will sign off after 11 seasons, which is leaving the comedy’s stars wondering what’s next.

That includes Ty Burrell, who has won two Emmys as Phil Dunphy. While the actor contemplates his long-term future—”I’ve even contemplated stepping away entirely,” he said—he has already lined up one new gig. He’s a voice on Fox’s Duncanville, an animated comedy airing midseason about a 15-year-old boy with an active fantasy life. (The show is executive produced by Amy Poehler, who voices the boy and his mom; Burrell voices the father.)

Burrell spoke with Adweek about being able to say goodbye on a TV show for the first time in his career, what he still hopes to do on Modern Family before its finale and his most memorable brand partnership.

Adweek: What has your experience filming Modern Family this season been like, knowing that you’re doing everything for the last time?
Burrell: I really am feeling a lot of gratitude about actually being able to say goodbye, because most of my career—not most, all of my career—the goodbyes were imposed on us. It was like, “You’re canceled,” or “The show is closing.” It was never in your control. So I’ve never had this experience, of being able to actually know the finish line. I think everybody’s feeling a lot of gratitude for that. Especially the older actors, who have had shows pulled out from under them. I think it will get more melancholy as the season goes on, but, at the moment, we’re just grateful to have one more season.

You’ve done so much on-screen as Phil. As you go into this final season, is there anything you’re hoping to do as Phil before the show is over?
The things that I love to personally, I haven’t gotten to do on the show. I love to ski and I love to fly fish, so those things would be great. An episode of Phil out on a river somewhere … There’s something there, right? I like that idea.

You’d definitely end up submerged at some point.
Or entangled! I love that.

Did you sign on to Duncanville in part because you were wondering what’s next for you?
A little bit, yeah. I really don’t know what I want to do afterwards. I’ve even contemplated stepping away entirely. And Duncanville was just the perfect job. I hope it runs forever; I hope it has The Simpsons’ 30 years in it. Because it satisfies all the great things about doing comedy. The table reads are hilarious. You get to do all kinds of “alts” [alternate lines] in the recording studio. The time obligation is a couple of days a week. I’m still able to be with my family. So it just felt like the perfect job to take while I was contemplating—and hopefully to have for a long time.

You get approached for a lot of voice work and animated projects. How do you decide which voice projects make the most sense for you?
My kids definitely have an impact on that, in terms of what product or what the content is. I think Duncanville is really perfect, because they’re not quite old enough to watch Duncanville, but they’re very close. When Modern Family is over, I think it will be a kick to have them watch it. They’re 9 and 7, so in a few years I think they’ll get a kick out of it.

You’ve done several brand partnerships over the years [including 2016 spots for the National Association of Realtors and helping Nike recreate Animal House’s toga party in 2015]. Which has been the most memorable?
I don’t really have a bad one. I’ve had so many good experiences. One of them was, we did a Toyota thing, and it may have just been in Australia, but I got to do it with [Modern Family creators] Chris[topher Lloyd] and Steve [Levitan]. It was really seamless. I was playing Phil; it was just like another day at work. It was really, really awesome.