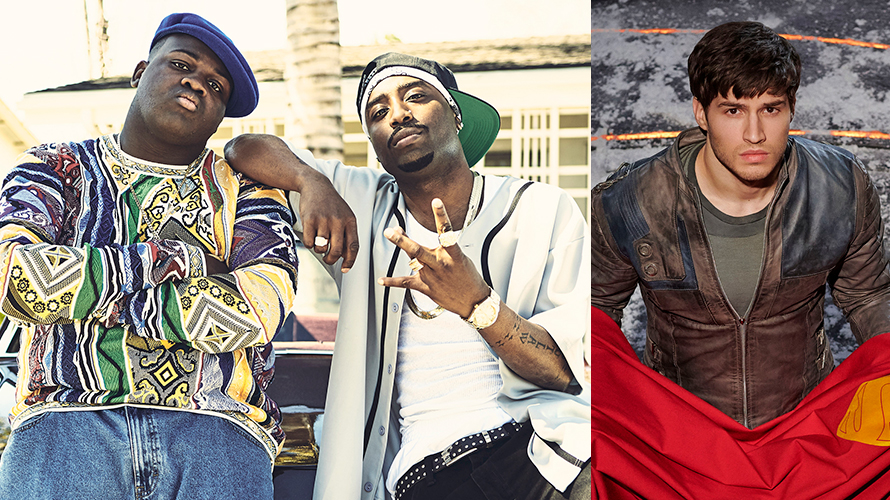 Now that the Winter Olympics are over, NBCUniversal is refocusing on the other programming in its portfolio. And for Chris McCumber, president of entertainment networks for NBCUniversal Cable Entertainment, that means he can finally unveil big moves for both networks he oversees: USA and Syfy.

Tonight, USA delves into the true-crime limited series genre for the first time with Unsolved: The Murders Of Tupac and The Notorious B.I.G., which examines the deaths of the iconic rappers. And on March 21, Syfy will finally debut its Superman prequel series, Krypton, which focuses on Superman’s grandfather, Seyg-El.

McCumber talked with Adweek about turning Unsolved into a franchise, Mr. Robot’s Season 3 resurgence, Syfy’s brand refresh and why viewers will see more limited commercials on his networks.

Adweek: You haven’t done a true-crime, limited series like Unsolved before. What was the thinking behind it?
Chris McCumber: What USA is looking for is shows around heroes, rebels and icons. So when Unsolved came to us, the iconic story of Biggie and Tupac, to be able to tell that story in a way that no one else has done before, we thought that was a great opportunity.

Also, at its heart, it’s a story about two friends, what happened to those two friends, and the murder investigation behind it. It’s got that crime drama element to it as well, so it definitely fits in to what USA has been doing and what our audience is looking for.

Do you view Unsolved as a potential franchise, where you could do a second season focusing on a different case?
Absolutely, depending how it does. We’ve feeling really good about this one. If we see success, we could definitely see it being franchised into other seasons and other stories.

There was a bit of a backlash to Mr. Robot in Season 2, but viewers seemed to be back on the bandwagon in Season 3. Did you feel there was a creative surge last season?
We’re incredibly proud of every season of Mr. Robot. Sam [Esmail, the creator] in the third season brought in Bobby Cannavale, and the performance that he gave, we thought was fantastic. But overall, you have the story of [Rami Malek’s] Elliot, as the guy who’s trying to save the world, trying to undo that hack. And I think no matter what, that has a lot of resonance with the audience. We’re so proud of what Sam’s been able to do with the show.

Syfy is debuting Krypton next month, which is a big swing for that network. What are you hoping for from the show?
The heart of Syfy’s brand is all about fandom, and I can’t imagine a bigger fandom than the Superman fans. So having Krypton certainly plays in to what we’re doing. We’re bringing out new series for Syfy and finding the shows that we believe will have not only a built-in fanbase, but a fanbase that we can grow from that.

Are you going to see how Krypton performs before making any other decisions regarding shows based on other DC Comics properties?
We’re actively developing superhero and comics [series]. Certainly Krypton’s a big part of that. We have a pilot called Deadly Class, which is in the young adult, comic book area. So certainly those are areas that we actively want to program.

Will Krypton be the biggest marketing campaign you’ve had around a Syfy show?
Let’s just put it this way: you won’t miss that there’s a Krypton launch. I promise you that. But if you look at each of the Syfy shows, we want to make sure there’s an event around each one. Krypton, for the fans of Superman and the fans of DC Comics, that will be an event. Nightflyers is another one—the first series from George R.R. Martin since Game of Thrones—and that obviously is going to be a big event for us.

Will you have any brand partnerships for Krypton?
Nothing that’s been announced yet, but certainly the IP [intellectual property] around Krypton and Superman is attracting a lot of buyers. We’re also looking for different ways to bring it to the audience, whether it’s limited commercials, sponsorship packages or something else.

Speaking of limited commercials, you just did that for your new Syfy series Happy last fall.
We went limited commercial for all eight episodes. That was a concerted effort from the beginning, because we wanted people to see Happy in a way that was more of an event. And we sold a couple of [pods] to single advertisers.

It’s almost been a year since Syfy’s brand refresh. Have you been refining those plans at all, or are you still on track?
What I’ve been really happy with is bringing in new audiences to Syfy. Look at Happy: Happy is younger and more upscale, than shows that we’ve had before. Futurama as an acquisition is bringing in new audiences to Syfy. We knew that Futurama would be a good addition for us, but to bring in viewers who had never sampled Syfy before is a real win for us.

We believe that Krypton will do the same thing. It all started with the Magicians. The Magicians brought in a younger, and more female audience to Syfy. So we’re bringing in this audience and we’ve definitely upped the game on the audience mix, which is a great story for us.