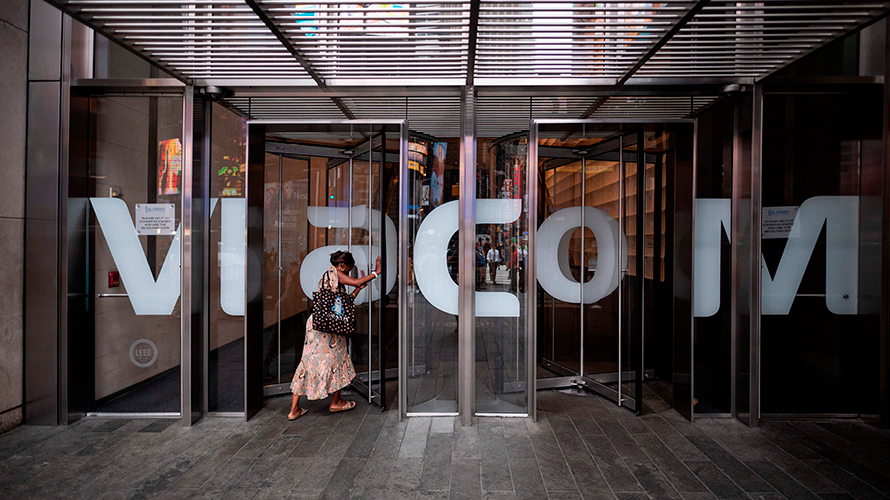 Nearly all of Logo's editorial staff was cut on Wednesday, leaving a skeleton crew of four people. Getty Images

ViacomCBS, created in December when Viacom and CBS merged, laid off contract workers across a number of its divisions today, a move the company said was due to the COVID-19 pandemic, which has shut down most Hollywood productions.

According to sources, “almost all” of the company’s contract workers are being let go across multiple divisions.

One of the hardest hit seemed to be two LGBTQ+ brands, Logo and NewNowNext, which had essentially merged in recent years as Logo’s original programming ground to a halt after its hit show RuPaul’s Drag Race moved to VH1. According to sources who spoke anonymously for fear of retribution, ViacomCBS laid off seven members of the NewNowNext and Logo teams, leaving only four people to operate the LGBTQ+ brands’ editorial, video, social and payroll needs.

In total, over 60% of the Logo team was cut. Only two of the remaining team are permanent staff.

Four laid-off team members from different ViacomCBS brands said they were not offered any severance pay and do not believe that anyone else was offered severance packages of any kind. Adweek was able to directly confirm layoffs among people who had worked for MTV, VH1, CMT, Logo, Comedy Central, TV Land, Showtime and Paramount Pictures.

ViacomCBS brands also include CBS, BET, Nickelodeon, Pop and Smithsonian Channel, along with non-TV divisions such as the Simon & Schuster publishing house.

The company confirmed that the layoffs took place companywide, but did not comment on how many people were affected.

“Like many businesses, COVID-19 has had an unprecedented effect on our industry. With so many of our productions on hold for the past month and into the foreseeable future, we made the difficult decision to release a number of freelance and project-based employees, particularly in production while the shutdown is in place,” a ViacomCBS representative told Adweek in a statement Wednesday evening.

The representative pointed to a $100 million COVID-19 relief fund that ViacomCBS launched on April 9 to help support laid-off entertainment and production workers.

ViacomCBS did not comment on whether these layoffs were exclusively due to COVID-19 shutdowns or whether they were also connected to the larger companywide layoffs that have occurred since December’s merger across several divisions, including ad sales.

The company had hinted on March 27 that COVID-19 cuts could soon be on the way, saying in a statement, “Global concerns about the coronavirus disease 2019 have impacted the macroeconomic environment as well as ViacomCBS Inc.’s business.” At the time, the company said it was “also working proactively to offset a portion of anticipated revenue losses through cost-savings initiatives,” but did not specify what form the cost-saving initiatives would take.

A ViacomCBS worker laid off on Wednesday told Adweek that the company had already long employed tricky workarounds to keep costs low, contracting most of its workers through a third-party company called Cast & Crew to limit payroll numbers. At ViacomCBS, those workers are called PBEs, or Project-Based Employees, according to the laid-off worker.

While they often hold high-level jobs including management and payroll positions, they are not considered permanent staff, do not receive benefits and are even assigned a different work email address: @viacommix instead of @viacom.

“It’s ridiculous. We are asked to be at meetings at certain times of the day, we work specified hours. … There’s no world in which this is a contract job,” said one laid-off contractor who asked to remain anonymous, citing fears that their final paycheck could be withheld if they spoke publicly.

Another laid-off worker told Adweek that “almost all” PBEs were being fired by ViacomCBS, at least under the MTV, VH1, CMT and Logo divisions. It’s unclear how many people that is, but one source said they had been employed at ViacomCBS as a PBE for over six years and another said they had worked for more than three years at their job without ever being moved from PBE status to permanent staff.

The payroll company that ViacomCBS contracts with, Cast & Crew, itself laid off a “significant percentage” of its own staff last week, announcing on April 9 that executives would also take a 50% pay cut.

But this week’s call took a somber tone, said one laid-off staffer, as McCarthy announced that layoffs would continue through April 27. According to a laid-off worker who provided Adweek with notes from the call, the announcement was over in six minutes.