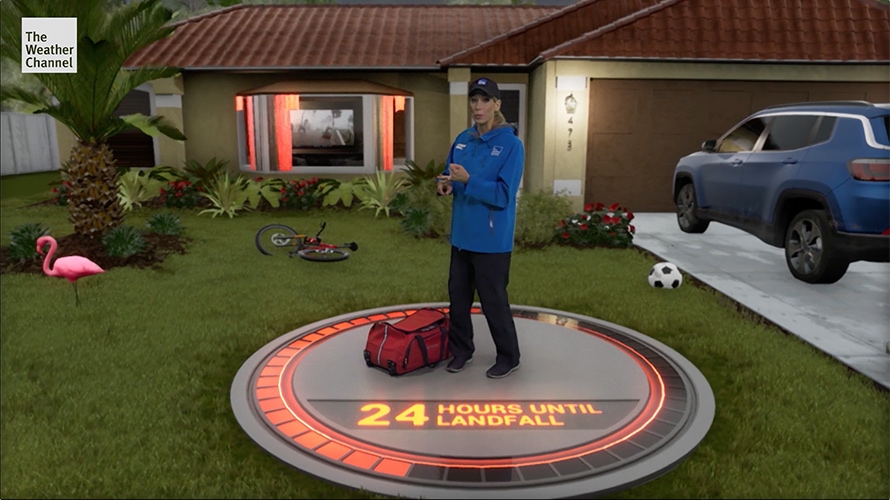 With Hurricane Dorian expected to hit Florida as soon as Monday, The Weather Channel has rolled out another of its Immersive Mixed Reality (IMR) segments, which give viewers an up-close look at the devastating effects of major weather events.

This time, the network partnered with State Farm, integrating the insurance company into the segment about hurricane preparation.

Hosted by Weather Channel meteorologist Stephanie Abrams, the video—which first aired this morning—explains to audiences how to best prepare for a hurricane, starting from 48 hours out, up until just as the storm makes landfall. Virtually placed in front of a home, Abrams gives safety and evacuation tips as the weather intensifies around her.

While previous IMR segments have featured more passive brand partnerships—last fall, a segment on how bad weather impacts a quarterback’s ability to throw the football included the SEC logo—this is the first one that explicitly integrates the sponsor into the video.

Abrams stands next to and uses a State Farm bag as she talks about the importance of protecting insurance papers and other documents during severe weather events like hurricanes; the State Farm logo also pops up on a Weather Channel segment airing on a TV inside the house that Abrams is in front of.

The Weather Channel has been using IMR technology for several spots illustrating the effects of weather events like tornados, storm surges, wildfires and ice storms.

Storm surge will be a huge factor for Hurricane #Florence Check out what it might look like with @TWCErikaNavarro: pic.twitter.com/TPqTZTmiAM

The network plans to use IMR technology in 80% of its programming by next year.
@jasonlynch jason.lynch@adweek.com Jason Lynch is TV/Media Editor at Adweek, overseeing trends, technology, personalities and programming across broadcast, cable and streaming video.