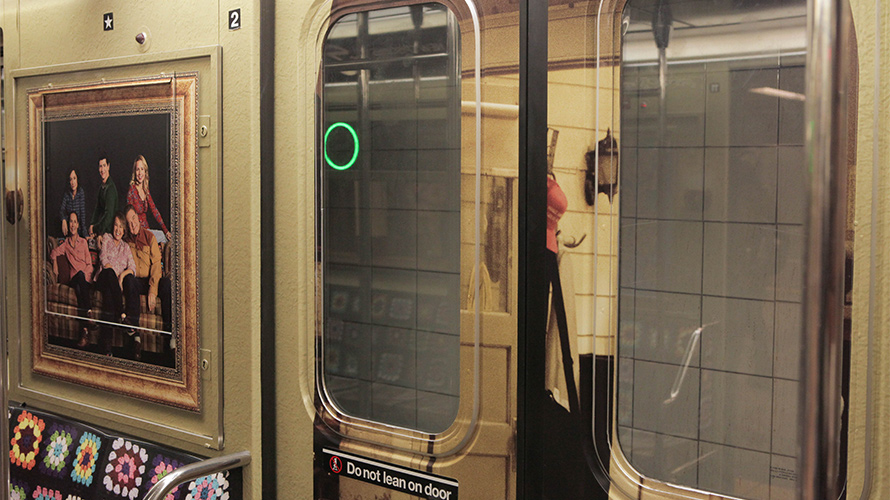 The train activation includes the Make America Great Again hat that hangs on the Conner family's back porch. - Credit by Dianna McDougall for Adweek

It’s been two-and-a-half weeks since ABC turned a New York subway train into the iconic Roseanne living room as part of its nostalgia-themed marketing campaign to promote the revival’s debut on March 27.

Since then, a few eagle-eyed commuters have spotted a curious element of the activation on New York’s shuttle train between Grand Central Station and Times Square: When some of the subway doors close, they reveal what appears to be a Make America Great Again hat.

ABC has wrapped one of the New York shuttle trains to recreate the living room of Dan and Roseanne Conner (played by John Goodman and Roseanne Barr). The subway seats are camouflaged to look like the Conners’ famous couch, down to the appearance of the iconic afghan. Meanwhile, the ends of each subway car are patterned after a fireplace, with photos of the Conner family and other trinkets on the mantle. The walls feature portraits of Barr, Goodman and the cast.

While the hat’s lettering is blurred in the activation, ABC confirmed that the object is, indeed, a Make America Great Again hat. It was not added to the campaign to be provocative; instead, along with the rest of the subway activation, it’s a faithful depiction of the contents inside the Conner’s working-class home in fictional Langford, Ill.

During this new season of the series, the hat hangs on Conner’s back porch and is visible behind the kitchen set. It also can be spotted during the new opening credit sequence. The hat isn’t referenced or worn during the revival, at least in the three episodes that ABC provided to press, although the “Make America Great Again” slogan is used as a punchline in the premiere episode.

During the Television Critics Association’s winter press tour in January, executive producer Bruce Helford said he thought Roseanne’s revival could help families who are split over Trump. The Conner family “represents a full cross-section of values of beliefs. Everybody in the family has a different take on things. And we wanted to get that debate going in a very honest way, in a very real way.”

Like many families across the country, the Conners have experienced deep rifts since the 2016 presidential election. Roseanne Conner, who voted for Trump, is estranged from sister Jackie (Laurie Metcalf), who sports a “Nasty Woman” T-shirt and a pink pussy hat in the first episode and blames Roseanne for Trump’s win. (However, Trump and Hillary Clinton’s names are never actually uttered in the premiere.) 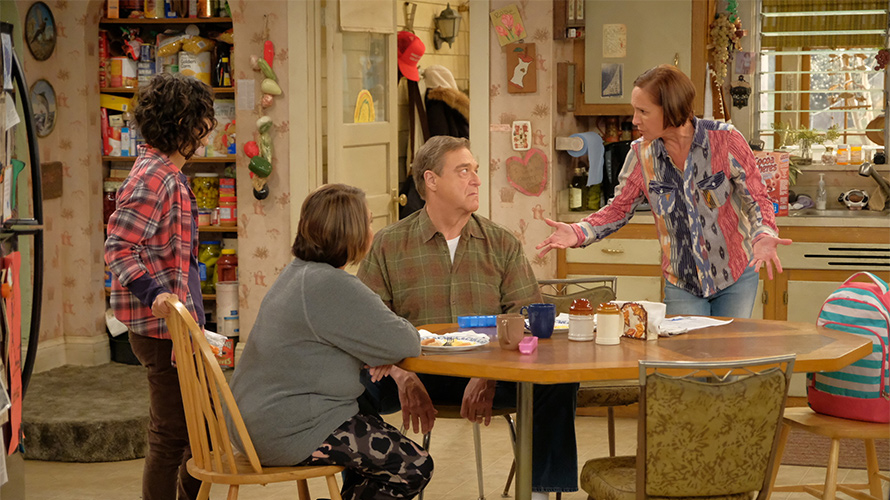 “Our country is very divided,” Sara Gilbert, who plays daughter Darlene and is also an executive producer on the revival, said in January. “And we did have a wonderful opportunity to talk about this in the context of a family, and I think part of what’s going on is that people feel like they can’t disagree and still love each other or still talk to each other. So, to me, it was a great opportunity to have a family that can be divided by politics, but still is filled with love. And what a great thing to bring into this country right now.”

In January, Barr—who has been a vocal Donald Trump supporter on social media especially—said that didn’t influence her decision to make her TV character a Trump voter as well. On the series, she said, “I’ve always tried to have it be a true reflection of the society we live in. I feel like half the people voted for Trump and half didn’t, so it’s just realistic.”

The comedian continued, “It was working class people who elected Trump. I felt that was very real, and something that needed to be discussed.”

In ABC’s marketing campaign for Roseanne, “we just want people to embrace the family that they knew and loved, but understand that time has passed. But hopefully they’ll enjoy spending the time with them just as much as they did several years ago,” said Rebecca Daugherty, evp of marketing for ABC, last month.

Barr’s hit sitcom ran for nine seasons on ABC, ending in 1997. The entire original cast is returning for the revival.

ABC’s New York subway activation will run for another week and a half. The network also recreated the Conners’ living room last week at SXSW.