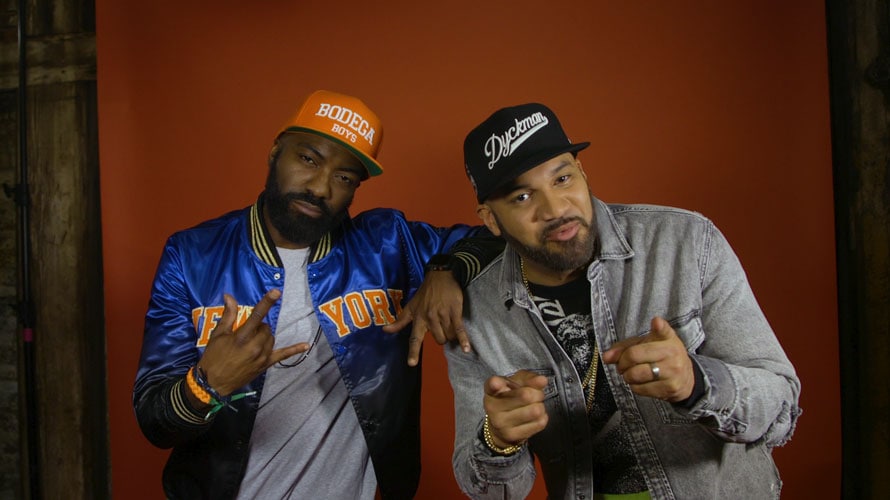 One might not associate Desus (Daniel Baker) and The Kid Mero (Joel Martinez), who cover Adweek’s Creative 100 issue this week, with “brand-safe” environments. Desus and Mero are known for their straight-talking takes on everything from baseball to pop culture, their late-night show on Showtime is full of curse words and their podcast seems like a conversation you would overhear on the subway.

They don’t hold back, which presents brands with a unique opportunity. But that ability to freewheel and riff off one another is the reason they don’t have traditional advertising on their podcast: Bodega Boys.

“It has to feel seamless,” Mero said. “It can’t just be like, ‘Yo, I’m jamming this fucking advertisement into the middle of this great flow that you guys have, and I’m just going to fucking T-bone some shit in the middle of it.’”

Their conversation moves fast, and so do their thoughts, which means that standard ads don’t work.

Desus and Mero do work with brands on advertising on their podcast, but they’re usually casual mentions, a “shoutout to the sponsor.” With a sponsor like Cash App, the ad could go like this: “‘Yo, shoutout to Cash App: You could pay your weed dealer, ahh ahh ahh.’ They don’t care, and they encourage that type of shit,” Mero said.

Naturally, it also has to be with the right brand.

“It just has to be an organic fit,” Desus said. An ad for a product like Nair would not work for the duo. “What if you just saw us as in a Nair commercial, like ‘We wear short shorts. Yeah, shave your legs, ladies!’” Desus said.

“Everyone would be like, ‘I guess they got the bag,’” Mero said.

That freedom also keeps them open to doing fake advertisements on the show as part of their comedy routine, which has occasionally resulted in unexpected perks.

One time, after the duo said “Bodega Boys, sponsored by Range Rover” on the show, Range Rover sent each of them cars to drive around for the month.

“They also were like, ‘If you crash this Range Rover, you are paying for it.’ I’m driving this Range Rover, 10 and 2,” Desus said, referring to the positioning of his hands on the wheel. “Go around! Go around!” Mero said, motioning to the imagined angry drivers behind them.

On Monday, Desus and Mero weighed in on the strength of brands like J. C. Penney and Payless for Adweek. Here’s the second part of that video: