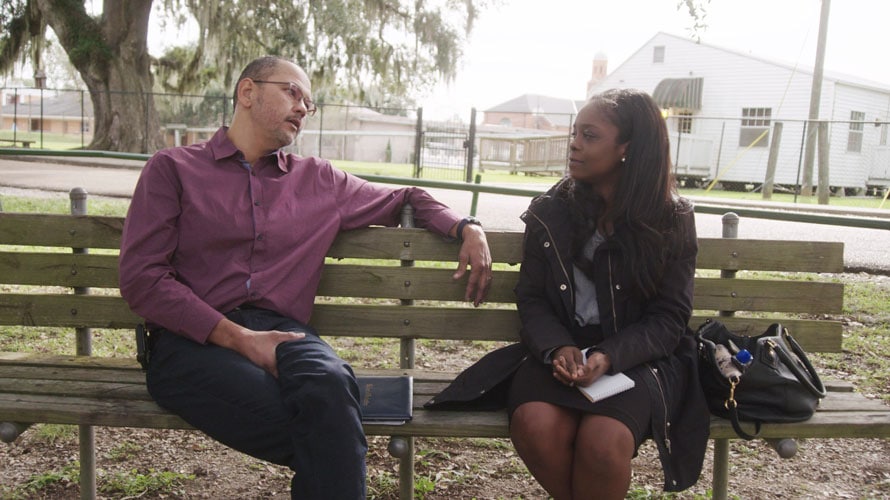 New episodes of The Weekly will debut Sundays on FX and be available on Hulu the following day. - Credit by FX

This Sunday, The New York Times is expanding to a journalistic platform it has never tackled before: television. Each half-hour episode of the new docuseries The Weekly, which debuts Sunday at 10 p.m. ET on FX with episodes streaming on Hulu the following day, will focus on a different Times reporter and story.

The 30-episode first season of The Weekly will spotlight such Times stories as the investigations into Louisiana’s T.M. Landry College Prep—which exposed transcript fraud, physical violence and emotional abuse at the school—and New York’s yellow cab industry, which has trapped thousands of immigrants in reckless loans.

The Weekly is the Times’ first attempt at a TV series. (The outlet was the subject of last year’s Showtime docuseries The Fourth Estate but did not produce it.)

Adweek sat down with two Weekly executive producers—Times assistant managing editor Sam Dolnick and Ken Druckerman, co-producer of Left/Right Productions—to talk about how they were surprised to end up with FX, why the show’s premiere was delayed half a year and how they balance telling a great Times story with producing a compelling episode of TV.

Adweek: What was the genesis of The Weekly?
Sam Dolnick: The past few years, the Times has evolved from being a print newspaper to—like all of us—a digital platform, to audio, which was a big breakthrough for us a couple of years ago. And TV was the next frontier.

The New York Times doesn’t know how to make TV, and rather than try to reinvent the wheel, we saw early on that we needed a partner. We sought out Left/Right for a lot of reasons. Ken himself was a big one, but we also admired the work that Left/Right did, from The Circus, which is fast and stylish and newsy, to This American Life, which is artful and inventive and creative. Ken had some ideas about what New York Times stories could look like on TV, and we had ambitions to go on TV—and we started ginning this thing up together.

How did you decide that FX was the best fit for what you both wanted to do?
Ken Druckerman: We spent a year developing the show and trying to fine-tune the idea. Then we took it out to the marketplace and got a really strong reaction. There were several parties that were interested, but in FX and Hulu, we felt like we were able to get the reach of basic cable—a big audience—and also have that digital side through Hulu. So it felt like a wonderful opportunity. And FX and Hulu were interested in the concept that we were pitching, rather than telling us how they might change it around.

Dolnick: I think we were both surprised to end up at FX. That’s not how we would have predicted it. But once we met [FX Networks chairman] John Landgraf and understood better what he was trying to do, it really lined up with us. And we really liked that they hadn’t done documentary or news. It felt like completely fresh territory. Many other partners we were excited about had big brands and big identities in that space, and it felt strange for the Times to also be there. So we liked that we are alone here.

Is the Times planning any Weekly-related subscription offers to take advantage of potential new interest in the Times via these channels?
Dolnick: Yes. Our marketing department is very excited about the debut of the show, and about building a bridge from the show to our website, to our print paper. But all of that’s brand new, so we’ll be exploring what works and how to make those connections. [Editor’s note: Following this interview, the Times told Adweek that as part of The Weekly’s launch, Hulu subscribers will be invited to subscribe to The Times for $1 a week for one year.]

But we don’t see this as a new way to drive traffic to the website. If that happens, it’s great. But what we’re hoping to do is have this stand up on its own as an institution that creates its own audience and its own following, and hopefully gets more people interested in journalism and in the Times, as well as the big stories of the day.

How are you balancing what Sam and the Times need to get a great story, what Ken and his team need to make a great episode and what FX needs to make a great series?
Dolnick: We start with The New York Times first. So, what are the journalists’ stories that we want to tell, that have impact? We’re doing one big story a week; that is a really high bar. And then, how do you tell those stories with as much journalistic rigor as you would for any other platform? That doesn’t budge, and that comes first.

Then, Ken’s got a team of super-talented producers who are saying, “Okay, we’re going to tell the ISIS story. What if we go to the front lines here, what if we get this interview, what if we do that; how do we work within the story that the Times wants to tell?”

FX has been an ideal partner in that they’re watching cuts of the episodes with fresh eyes and saying, “This interview doesn’t quite land. I don’t really understand how you guys are explaining the evolution of ISIS here.” But they’re not editors, they’re not journalists; they’re just smart television storytellers who have been really good guides for us on what’s working and what’s not.

Is there flexibility with the episode order, where you can move something up or add something in if it dovetails nicely with current events?
Druckerman: Yes. Of course, we can’t flex that muscle until we’re on the air, but we’ve built a team that can do two things simultaneously and not exclusively. One is to create deeply researched and reported feature stories that have a somewhat evergreen quality. But at the same time, we can turn our narrative journalistic storytelling battleship towards a more immediate story and “crash” on that story to turn it around very quickly. We’ll pick our moments to do that, when we feel that being visual or putting it on TV adds value in a way that print couldn’t.

How did you determine what was off limits or too legally sensitive to film? Or did you just shoot everything and then figure it out later?
Dolnick: There’s not really an “off limits,” in the sense that The Weekly is now a department in the newsroom. There’s the foreign desk, the national desk and the Weekly desk. And Dean Baquet, the executive editor, has said he wants this show to break news, he wants it to be edgy, he wants it to be investigative. So we feel like everything is on the table.

But to your point, we are developing a new language. We were doing a story in Mexico, for instance, where our Mexico City bureau chief had a source that’s instrumental to the story and has an incredible tale to tell, but he had to be anonymous for his own security reasons. At first, it was like, “Oh, that’s going to kill the story.” And then, our very clever producers and cinematographers figured out how to shoot an anonymous interview in a way that feels pretty fresh. They’re focusing on details like his knuckles, and the stubble on the back of his head, and his shadow—these artful touches that allow the interview to live. It’s our first and best example of what an anonymous interview looks like for the TV show. So we’re figuring that out in real time.