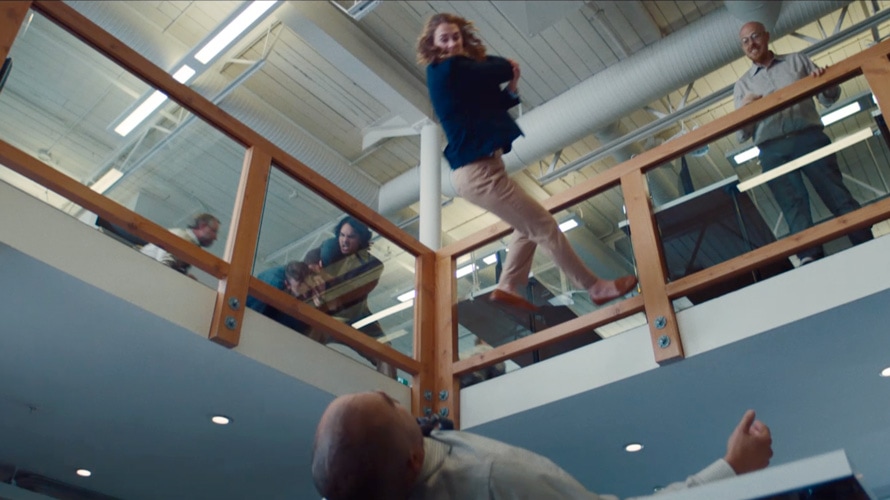 In the “Office” spot, a coworker’s incessant pen clicking leads to an all-out office rumble. - Credit by Fox Sports

Earlier this month, Fox Sports successfully relocated WWE SmackDown from USA to its new home at Fox, where the program is now called Friday Night SmackDown. But now comes the hard part of maintaining and nurturing that Friday night audience 52 weeks a year.

Fox Sports will attempt to do just that with the next phase of its “We’re All Superstars” campaign (“superstars” is the moniker for WWE athletes): three new spots featuring average joes channeling their inner wrestler at work and at home.

“It’s so iconic, all the tropes around professional wrestling and WWE, that there’s this whole language of the WWE that we all instinctively know, whether we’re fans or not,” said Robert Gottlieb, executive vice president of marketing at Fox Sports. “That drove the insight of, ‘Inside, we’re all superstars.’”

The three followup spots focus on “otherwise innocuous moments in people’s lives where they fantasize about how different that moment might be if they were a WWE Superstar,” said Gottlieb. “There’s a little Walter Mitty to it all, which is part of the appeal to WWE, that fans get to really imagine being in those moments with those characters, and then taking that into their real life.”

In the “Office” spot, a coworker’s pen clicking inspires an all-out office rumble.

A dad retrieving his son’s frisbee from the roof channels Kofi Kingston in “Ladder.”

And in “Entrance,” a supermarket employee strides onto the floor Undertaker-style.

All three spots will begin airing digitally, then on linear TV beginning in November.

The spots were shot months ago, long before the recent WWE draft to determine which characters would go to SmackDown and which would go to sister program Raw, which remains on USA.

“They were very tight-lipped about what was going to be [included]; they really didn’t know what was going to happen in the draft pretty much until the last minute,” Gottlieb said. “We will be doing some revisions now that the draft has actually gone down.”

For starters, “Office” features Charlotte Flair at the end, but she was drafted by Raw. So the linear version of the spot will instead spotlight Sasha Banks, who was claimed by SmackDown.

In June 2018, Fox snapped up the rights to SmackDown, which had aired on NBCUniversal since 2010, starting on Syfy, and moving to USA in 2016.

Its Oct. 4 debut on Fox drew a healthy 1.4 rating in the 18-49 demo; that number dropped to 1.0 in week 2 but still nearly doubled the demo rating of anything else airing on broadcast that night.

Friday Night SmackDown will air every week of the year, as opposed to Fox Sports’ usual seasonal show, which requires a different kind of marketing campaign for Gottlieb and his team.

“We haven’t done it before, so we’ll learn as we go along,” Gottlieb said. “The way we’ve looked at it is [a] big drive to launch and the good post-launch sustain period, which is very typical of how you would launch a primetime or an entertainment series.”

Beyond that, Fox Sports will concentrate its SmackDown marketing around WWE’s premium pay-per-view events like WrestleMania, SummerSlam and next month’s Survivor Series, given that “people want to get caught up on the storylines before the pay-per-views, so there’s some opportunity there.”

Next year, Fox Sports and Wieden will create new spots, which will be less comedic than the first batch but continue the “We’re All Superstars” campaign.

“One of the things we love about ‘We’re All Superstars’ is it lets us go in a lot of different directions that are true to WWE and their environment,” Gottlieb said. “So the next set will focus on the athletes themselves, letting fans understand why these athletes are indeed superstars.”